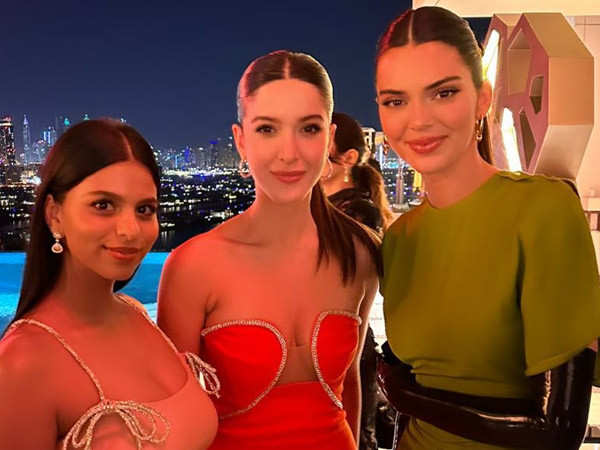 Suhana Khan and Shanaya Kapoor are reportedly in Dubai where the two caught up with popular model Kendall Jenner. Pictures from the party which was held for the launch of a luxury hotel have surfaced and are now doing the rounds of the internet.

Shanaya Kapoor took to her social media handle to share glimpses of her evening with Suhana Khan. She also dropped a photo of the two hanging out with Kendall Jenner. Suhana was seen in a cute pink bodycon dress while Kendall wore a green ensemble with chic black gloves.

The pictures went viral in no time.

On the work front, Shah Rukh Khan’s daughter Suhana Khan is all set to make her acting debut with Zoya Akhtar’s The Archies. The film which also stars Boney Kapoor and Sridevi’s younger daughter Khushi Kapoor and Amitabh Bachchan’s grandson Agastya Nanda, Vedang Raina, Dot and others will arrive on OTT this year.

Meanwhile, Shanaya Kapoor will reportedly make her debut with Bedhadak produced by Karan Johar. The film is a Shashank Khaitan directorial which will also feature debut actors Lakshya and Gurfateh Pirzada.