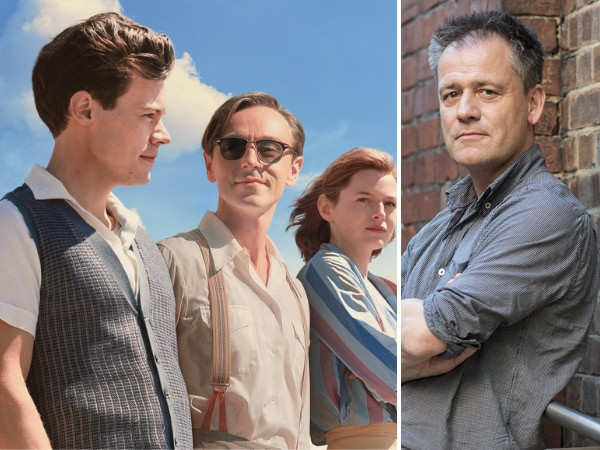 Harry Styles has had an interesting year on stage and on the big screen, to say the least. The pop star who made his acting debut with a brief appearance in the 2017 film Dunkirk, has been ramping up his filmography. Both his films that were released this year – Don’t Worry Darling and My Policeman garnered mixed reactions from critics and fans. In the latter, he can be seen playing Tom, a gay policeman who marries a school teacher Marion, (Emma Corrin) while having a passionate affair with Patrick (David Dawson), a museum curator. The film is set in the ’50s when homosexuality was considered a criminal act and sheds light on the dark chapter of UK’s history. With Harry Styles bringing in significant star power to the project, director Michael Grandage felt confident that the film’s sensitive subject would reach a larger audience.

In an exclusive interview with Filmfare, Michael Grandage opened up about directing Harry Styles, choreographing the film’s most intimate scenes and shooting amidst the pandemic.

What was it like working with Harry Styles and how was he taking direction?

Well, the entire cast including Harry Styles were all wonderful to work with. The important thing for any film is to get a good, strong ensemble cast that works together well. Some of the actors I’ve worked with before and some I hadn’t worked with, like Harry and Emma Corrin. So that was a wonderful opportunity to create a new relationship with an actor. All of them were good at taking direction. I think that the important thing is, I didn’t have to persuade any of the stars to take the roles they took. They were at the meetings wanting to already play a part in the film. For a director that’s a wonderful place to be because that means you’re already on a journey with people who want to go with you which is exciting.

Since you had one of the most famous pop stars as a lead, was it tempting to get him to sing or did you only want Harry Styles the actor?

I think what he wanted was more important. I wanted someone who could play the role of Tom Burgess. And the character was very much a part of the evolution of Harry as a screen actor away from his music career after Dunkirk. He knew Don’t Worry Darling was happening. So he wanted this role to be the next role he played on screen. He was very articulate about why he picked the film and what he wanted to bring to it. Another thing that someone like Harry brings to the table is a very large fanbase of young people. I think the most important thing for me in that respect is that young people will engage with this film, perhaps many more than it would’ve without Harry onboard. I think the message of the film is a very important one. They will be able to see what it was like to live in a world where you weren’t allowed to be free and allowed to be who you are. And to have them as ambassadors for being against that and moving forward is a very powerful thing to have.

How did his co-star David help Harry create the characters’ on-screen chemistry?

David Dawson is someone I had worked with in the theatre before and I knew him to be the most incredible open and highly collaborative actor. And I knew he would have a wonderful partnership with someone like Harry. They were both incredibly sensitive to all the things he had to do together on screen. They were very good at working together. We did a lot of rehearsals.

What went into choreographing the sex scenes?

The word you used is perfect – choreography. We wanted to create a choreographed sets for all of the sex scenes. I asked them to look at a few films that had a big influence on me to look at the nature of the choreography and the sensuality of touch generally. David was amazing at that because he brought a lot of his personal experiences and added his own voice to the role and together they made a wonderful couple. So it was great.

What were the biggest challenges of shooting this film?

I’m afraid the answer to that is a little bit dull. But the most challenging thing was that we had to make the entire film during the pandemic. I’m sure you’d love a more artistic response but the truth is, I’ve never worked in circumstances like that and I hope we never have to do it ever again. There wasn’t even a vaccine available back when we were filming and it was a very tough environment to make a movie against that backdrop. I’m thrilled to say that we came out of it with a film we all wanted to do. It wasn’t compromised artistically so I’m very happy.

My Policeman is available on OTT.