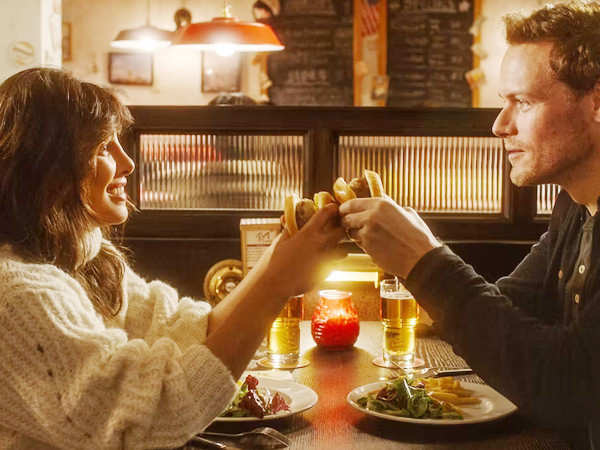 Priyanka Chopra is all set to return to the big screen with her upcoming film Love Again. Previously titled It’s All Coming Back to Me, the romantic drama also features Sam Heughan and Celine Dion. While the film was announced last year, the actress has now shared stills from the movie along with its new release date.

Priyanka Chopra took to her social media handle to offer a glimpse of Love Again. The stills see the characters gazing into each others’ eyes. She captioned the post, “#LoveAgainMovie, coming exclusively to movie theaters worldwide on May 12th! Anyone who knows me knows how much I love @celinedion. I’m so proud that our movie will feature new music from the wonder herself! Yay @samheughan we did it!!!”

The official synopsis of Love Again reads: What if a random text message led to the love of your life? Mira Ray, dealing with the loss of her fiancé, sends a series of romantic texts to his old cell phone number… not realizing the number was reassigned to Rob Burns’ new work phone. A journalist, Rob is captivated by the honesty in the beautifully confessional texts. When he’s assigned to write a profile of megastar Celine Dion (playing herself in her first film role), he enlists her help in figuring out how to meet Mira in person … and win her heart. The film will release on May 12 2023.

Priyanka Chopra was last seen in The Matrix: Resurrections. The Matrix sequel led by Keanu Reeves and Carrie Anne Moss. Apart from Love Again, the actress is attached to star in spy thriller series Citadel. She will also star in Farhan Akhtar’s Jee Le Zara alongside Katrina Kaif and Alia Bhatt.

At present, Priyanka Chopra is back in India after almost 3 years.

Also Read – Priyanka Chopra, Vidya Balan, Janhvi Kapoor And Other Celebs Get Clicked Out And About In The City