Avatar: The Way of Water trailer unleashes an even more breathtaking Pandora. Watch:

Avatar: The Way of Water trailer unleashes an even more breathtaking Pandora. Watch: 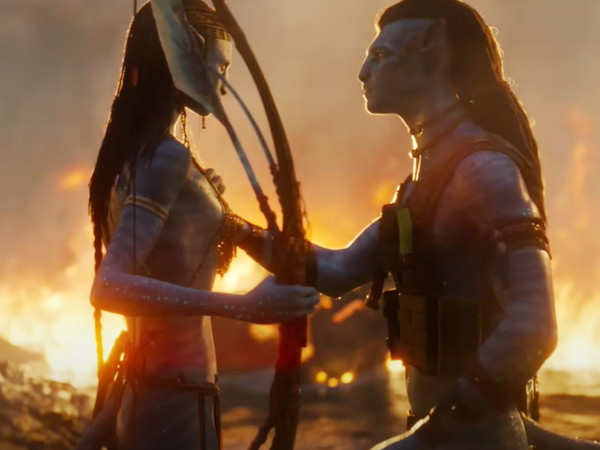 The years-long wait for Avatar: The Way of the Water, the sequel of Avatar is almost over. The James Cameron directorial starring Sam Worthington, Zoe Saldaña, Sigourney Weaver, Kate Winslet, Vin Diesel, Stephen Lang, and others is one of the most hotly anticipated films of the year.

The full-length trailer of Avatar: The Way of Water offers a slew of stunning visuals promising a breathtaking return to Pandora. We also get a closer look at Jake Sully (Sam Worthington) and Neytri’s (Zoe Saldaña) family, Stephen Lang’s Colonel Quaritch and of course, Pandora’s underwater world.

The footage ends with Jake urging Nyetri to be strong against the impending conflict. While the plot is kept under wraps, it looks like the Na’vi will face fresh tragedies.

The film’s official synopsis reads – Set more than a decade after the events of the first film, “Avatar: The Way of Water” begins to tell the story of the Sully family (Jake, Neytiri, and their kids), the trouble that follows them, the lengths they go to keep each other safe, the battles they fight to stay alive, and the tragedies they endure.

Avatar: The Way of Water is set over a decade after the original film’s events. The film’s run-time is almost three hours. So there is a lot more than what the teasers reveal.

Avatar: The Way of Water arrives in cinemas on December 16.

SEE ALSO: James Cameron says the 3D movie craze isn’t over. We’ll find out if people show up for Avatar 2