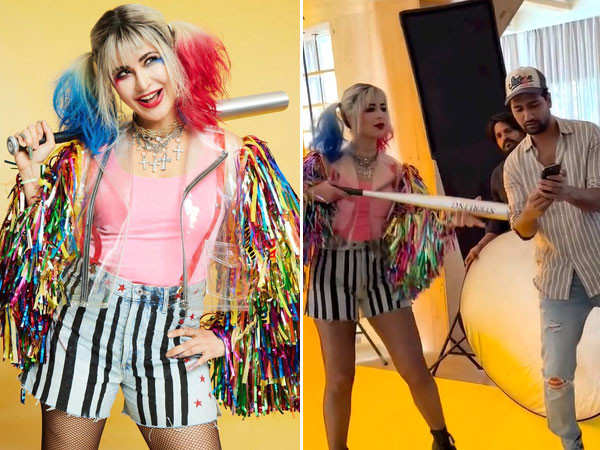 Like so many celebrities from B-Town, Katrina Kaif went all out this Halloween. For the occasion, the actress dressed up as Harley Quinn from the DC live-action film Birds of Prey which featured Margot Robbie. Katrina nailed the look with an accurate costume and shared several glimpses of her Halloween get-up.

In a BTS video from the Halloween shoot, Katrina Kaif can be seen taking directions from Vicky Kaushal who was helping her pose with her prop. Katrina posted the video with a caption that read, “Jab husband director ban gaye…”

Check out the video of Vicky Kaushal turning director for Katrina Kaif:

The video was showered with love by fans. Katrina Kaif shared photos of her Halloween costume on Monday.

Later the actress joined her Phone Bhoot co-stars – Ishaan Khatter who dressed up as Willy Wonka and Siddhant Chaturvedi who opted for a Shaktimaan costume.

On the work front, Katrina Kaif is set to appear in Phone Bhoot which releases on November 4 while Vicky Kaushal will next be seen in Govinda Mera Naam and Sam Bahadur.