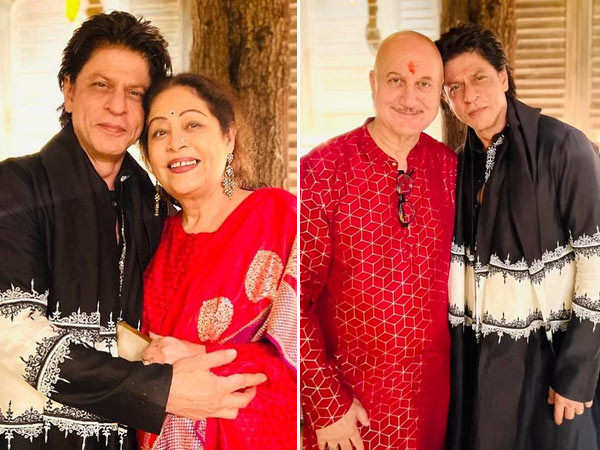 As Diwali festivities continue, several Bollywood celebrities have been seen at some of the most buzz-worthy parties. Last night, Shah Rukh Khan made an appearance at the Bachchan family’s Diwali bash hosted by Amitabh Bachchan.

In new inside photos, courtesy of Kirron Kher and Anupam Kher, Shah Rukh Khan can be seen decked up for Diwali. The star looked handsome as ever in a black ethnic ensemble. Kirron took to her social media handle to share a snap alongside SRK. She captioned the post, “Last night with my dear friend Shahrukh. So wonderful meeting old friends for Diwali @iamsrk.”

Kirron and SRK have worked together on many films including Main Hoon Naa. Check out the photo here.

Meanwhile, Anupam Kher shared a snap with Shah Rukh Khan where the two can be seen having an unexpected Dilwale Dulhania Le Jayenge reunion.

On the work front, Shah Rukh Khan will soon be seen in Pathaan with Deepika Padukone and John Abraham. He’s also starring in Atlee’s Jawan with Nayanthara, Thalapathy Vijay and others, and in Rajkumar Hirani’s Dunki with Taapsee Pannu.