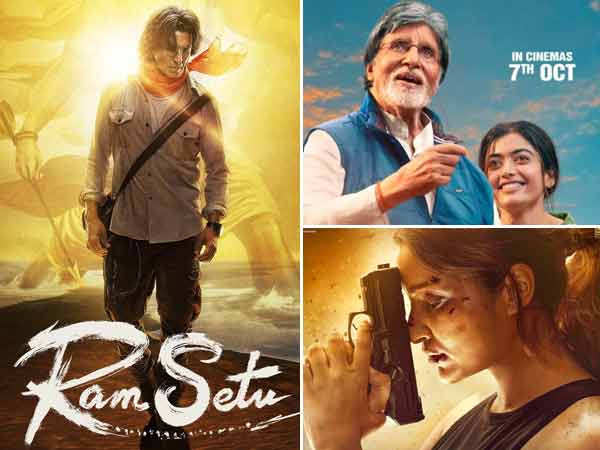 October is here and so is the steady supply of holiday movie releases due for Diwali this year. The month’s calendar is packed with some interesting upcoming Bollywood movies arriving in theatres and on streaming. Among the films releasing in theatres is Goodbye – a comedy-drama film chronicling an Indian family faced with a tragic loss. It features Rashmika Mandanna and Amitabh Bachchan’s onscreen collaboration. The month will also see the release of Ayushmann Khurrana’s latest social comedy Doctor G in which he will play the role of a hesitant Gynaecologist. Actor Akshay Kumar’s will be seen in the much-anticipated action-adventure film Ram Setu. Moreover, Chello Show or Last Film Show, India’s official entry to the Oscars 2023 will hit Indian cinemas.Other October 2022 releases include Madhuri Dixit’s family drama Maja Ma and Parineeti Chopra-led spy thriller Code Name Tiranga.

Here are all the upcoming Bollywood films releasing in October 2022:
Maja Ma

After making her streaming debut with The Fame Game, Madhuri Dixit Nene is back with another digital title, Maja Ma. The film sees her play a mother – Pallavi Patel who is well-known for her skills in cooking and dancing. When an unfortunate rumour surfaces during her son’s engagement, it spells trouble for the middle-class family. The family drama aside, the film features Madhuri in Garba dance sequences.

Goodbye is perhaps one of the most anticipated films on the list. Starring Rashmika Mandanna and Amitabh Bachchan, Neena Gupta and others, the film is a comedy-drama that revolves around loss. In it, members of the dysfunctional Bhalla family are reunited after an unexpected death. The film sees Bachchan and Gupta as parents of four children including Rashmika Mandanna’s Tara. Touted as the lighthearted tale of an Indian family that bands together during a dark time, the film promises a heartwarming watch.

Comedy film Nazar Andaz revolves around Sudhir, a 55-year-old man who has been blind since birth. He lives with a housemaid Bhavani who eyes his wealth. When Sudhir takes in Ali, a street-smart thief, Bhavani gets competitive. However, the old man has plans of his own. Starring Kumud Mishra, Abhishek Banerjee, and Divya Dutta in leading roles, the film is directed by Vikrant Deshmukh.

Ayushmann Khuranna and social comedies pretty much go hand-in-hand. In Doctor G, the actor plays Uday Gupta, an aspiring Orthopaedic who is assigned to the Gynaecology department at his university where he’s the only male student. To fit in, he’s asked to “lose the male touch”. The film follows the chaos that ensues as he hesitantly navigates his unlikely career. The film also features Shefali Shah as a surgeon and Rakul Preet Singh opposite Khurrana. It also marks the feature directorial debut of Anubhuti Kashyap.

Parineeti Chopra’s next film, Code Name Tiranga is an action-packed spy thriller. The film which also features Harrdy Sandhu sees the Saina actress play Kismat – a highly skilled RAW agent. Kismat is driven and bent on completing her mission but her priorities shift when she crosses paths with Harrdy Sandhu’s Dr. Mirza Ali. He asks her to marry him and eventually her mission threatens his safety. From what the trailer reveals, the film will play out a classic ‘love vs duty to the nation’ narrative with a strong female protagonist.

Last Film Show or Chello Show is perhaps one of the most intriguing titles on the list of films releasing in October. The Gujarati-language film is India’s official entry to the Oscars 2023. As the film garnered attention for its selection in the Best International Feature Film category, it is set to release in Indian theatres after a successful run at international film festivals. Directed by Pan Nalin, Last Film Show tells the story of a 9-year-old boy Samay who lives in a remote area. When he discovers films in a projection room of a local single-screen theatre, his life changes. While he’s mesmerised by films, the world outside is changing with multiplexes and digital mediums gaining favour. The film is a simple ode to movie lovers that deserves all the attention it can get.

Added to the catalogue of upcoming Bollywood movies that call out society’s toxic beauty standards is Double XL. Starring a powerful duo – actresses Sonakshi Sinha and Huma Qureshi, the film revolves around two plus-sized women who deal with fat-shaming which is sadly normalised. The slice-of-life comedy follows Rajshree Trivedi and Saira Khanna as they navigate body image issues while addressing society’s flaws. The highlight of the film is the chemistry between Huma and Sonakshi who are as they take on the quirky comedy. It also features Zaheer Iqbal and Hamat Raghavendra in pivotal roles.

Thank God is an upcoming Bollywood comedy movie that features Sidharth Malhotra and Ajay Devgn. In it, Devgn plays the role of a modern Chitragupta clad in a business suit. He is tasked with keeping a log of the sins and good deeds committed by human beings. When Sidharth’s Ayan Kapoor meets with a car accident, he’s transported to Yamdodh where Devgn’s Chitragupta is ready to play “the game of life” with him. And so begins a recap of Ayan’s many sins from anger to lust and envy. The film also features Rakul Preet Singh who plays the police officer wife of Ayan. From the looks of the trailer, the film which is directed by Indra Kumar relies heavily on VFX as it switches between Earth and Yamlok.

After headlining Samrat Prithviraj, Raksha Bandhan and Cuttputlli, the next film on Akshay Kumar’s 2022 line-up is Ram Setu. The Bollywood movie will see him in a National Treasure-esque action-adventure film. It follows an archaeologist tasked with investigating the Ram Setu bridge. And he has to prove its existence before it is destroyed. The film is expected to be an action-packed ride with underwater sequences. It also features Jacqueline Fernandez and Nushrratt Bharuccha in pivotal roles.

While you’re here, check out our list of top Hollywood movies to add to your watchlist: From Interstellar to Top Gun: Maverick, Here Are Top Hollywood Movies You Can’t Miss