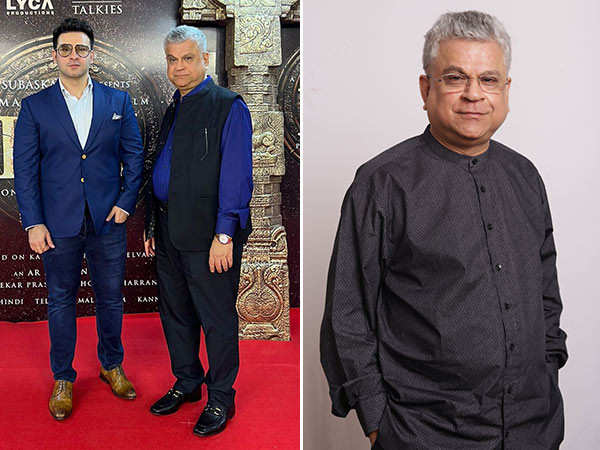 Kumar Taurani’s Tips Industries, one of the largest music companies has acquired the official music rights of Mani Ratnam’s Ponniyin Selvan: I and PS II which is going to release in April 2023. Besides this he also acquired music for the Telugu film Shakuntalam directed by Gunasekhar and Hari Har Veera Mallu. In an interview with Filmfare he talks about his new ventures and more. Excerpts

What prompted you to acquire music rights for the Tamil film Ponniyin Selvan I?

We have been in the music business since 1981. Then from year 88 we started producing films as well. In between we have also done South and Punjabi films. Our music business was in a bit of trouble due to MP3 and radio, but now the business has picked up in the last few years. We started again and created our own YouTube channel. We started working in multiple languages.  When we thought of the Tamil industry,  we decided that we would enter there with a big film. That’s why we chose Tamil films like PS I and PS II. That was the reason behind acquiring music rights of the Telugu film Shakuntalam as well. PS I has great music by AR Rahman, director Mani Ratnam is also a legend and has such an amazing star cast. Jab sab kuch grand hai, to apko sochne ki zaroorat hi kya hai!.  So we contacted the producers and showed interest in buying the music for the film. Ham decide karke gaye the ki is ek meeting mein hi deal done karni hai aur hammne kar diya.

The South Film Industry is doing better business than Bollywood these days. Was this why you thought of associating with South films?

We acquired the rights of the film in this year of March-April, till then there was no such scene. Yeh sab hamare liye mayne nahi rakhta hai. We have seen a phase where 30-35 films have been a super hit in a row and sometimes films flopped due to working with big filmmakers. Ups and downs are part of life.

No worries at all. I think business requires some freshness. Due to Covid, many films suddenly stopped in the middle. Then the lockdown went on for a long time. This has some impact that is seen in recent films. But if you see, Bhool Bhulaiyaa and Brahmastra have done well. Yes, people need to understand that content is king. I think Bollywood will bounce back big time.

What’s your strategy for the future?

Tips ne hamesha bahut accha kaam kiya hai. In the ’90s we were No. 1 not only in music, but also in production. We have entered into production again.  Everything is going well.

How do you pick a film to acquire music rights and also what’s your criteria to produce a film?

Talking about music, if a film is big, we see who is the music director and who are the actors. If it is a small film, we advise the producer that we are taking your film and involve us too in whatever music you create. Mostly the producers agree and together we create music. Like we had done with Anil Sharma’s Genius (2018), before that Aksar 2 (2017) and Shab (2017) with Onir. The music of those films was very good, because we created music together. But when the film is big, the responsibility of the producer becomes more. If we talk of producing a film, the most important thing is the story. If the story is good and the director is good, then the appropriate star cast also happens.

Do you think the audience’s tastes have also changed after the pandemic?

If you see our films, we have made an action film like Soldier (1998), family-friendly film like Kya Kehna (2000), comedy films like Kunwara (2000), Albela (2001), horror like Raaz (2002), The Legend of Bhagat Singh (2002) a patriotic film. Even today, in the list of top 20 films there will be 3-4 films from Tips. I think the story should be good. Jab aap theatre mei jaayen, lights off ho aur film shuru ho, tab screen par aata hue character ne aap ko pakad lena chahiye. If the audience catches it, they will definitely like the film. Your script should be tight. The viewer who is sitting in the theatre after buying a ticket of Rs 500, should not get up from the chair before the film is over. Agar aap ye nahi kar sakte toh, film banane ka kya fayda?

Tips Music Company’s journey started with cassettes, then CD and now digital…. How do you see the journey from then to now?

Every phase has advantages and disadvantages. Earlier we had power. Ham maalik the, un dinon hamara rubaab hua karta tha. Because the distributors and dealers were smaller than us. They always wanted to sell our stuff. Now the game has changed. The era of cassettes and CDs is no more. The partners we have right now, be it Spotify, YouTube, Zee TV or Sony, are billion dollar companies, so the equation has changed. My music is exclusive. If you want Taal or Raaz’s or whatever music, then you have to take it from me. When this new phase of digital started, people thought of avoiding Tips, but not now…  they can’t avoid us.

How do you see remixes and recreations of original songs which are already very popular… Many people believe that the songs are being spoiled by remixing.

Jo ye baat karte hain ki gaanon ko spoil kiya ja raha hai, wo wahi hai, jo original songs se jude hain. And they are mostly artistes who have composed the original song. They have so many feelings and emotions associated with their creation. Actually, we are the owner of the song. So If I recreate it, I am also right. When a new song comes, it earns a lot in the first year. You may listen to this song 1000 times, but after 5 years you will hardly ever listen to it and will not even get business. If I recreate an old song, then there are two advantages. One, the company will surely earn money, secondly, the new song will also have publishing rights, this means some income goes to the musician and lyricist too. A part of what we earn definitely goes to them too. The new Chhama Chhama with Elli Avraam got one crore views. And after this people watched the old song as well. Now people are watching Urmila Matondkar and also Elli Avraam and both are getting good views. One more thing, the new audience will not connect with Urmila Matondkar, but with today’s generation actors like Sara Ali Khan or Kiara Advani, they will connect more. So I don’t think we’re doing something wrong.

How do you balance creativity and business aspects?

See, If I am the owner, I will not allow my song to get spoiled, right? Now it is my decision what is good or what is not. No one can say that creativity is right or wrong. Some people will find it good, some will not. There is no end to this discussion. I believe that the owner has the right to know how and with whom to recreate his song.

Will your son Girish Kumar be seen again in a film?

Girish is waiting for a good script. He was offered three-four films in the last few years but they didn’t appeal to him. He is helping me in the business. If he likes a script, then he’ll definitely get back to acting.