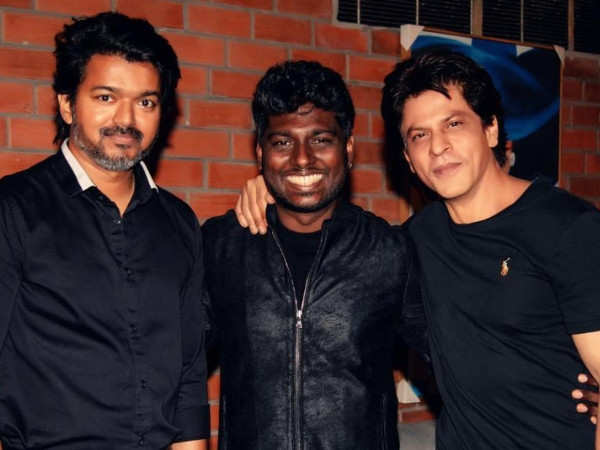 On Wednesday, director Atlee rang in his 36th birthday. To celebrate, the director hosted a star-studded birthday bash. Among those attending were Shah Rukh Khan and Vijay. The stars got together for a picture and it’s the best thing you’ll see on the internet today.

Offering a glimpse of his birthday celebrations, Atlee took to his social media handle to share a photo with Shah Rukh Khan and Vijay. Calling the actors his “pillars” he captioned the click, “What more can I ask on my bday, the best bday ever wit my pillars. My dear @iamsrk sir & ennoda annae ennoda thalapathy @actorvijay”

Shah Rukh Khan was photographed looking handsome as ever in a black t-shirt and jeans while Vijay and birthday boy Atlee also opted for black ensembles for the evening.

Soon after, fans showered the stars with love. In fact, many began theorising a Vijay cameo in Atlee’s upcoming directorial, Jawan. “So #Thalapathy’s cameo is confirmed?” a user wrote in the comments section.

Jawan will see Shah Rukh Khan and Nayanthara in lead roles. It is set to hit screens on June 2, 202. Shah Rukh Khan will next be seen in Pathan which arrives on January 25, 2023. Meanwhile, Vijay was last seen in Beast and will be seen in Varisu.