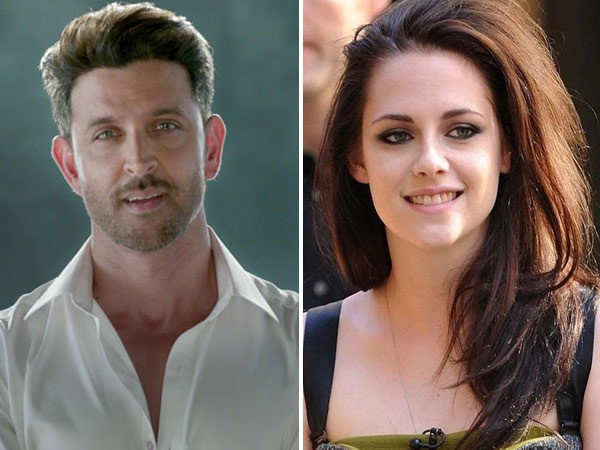 Hrithik Roshan is loved worldwide for his stellar acting and his good looks. While numerous Bollywood stars from Deepika Padukone to Ranveer Singh have expressed their love for the actor, even Hollywood actors can’t stop themselves from loving the Jodha Akbar actor.

Hollywood actor Kristen Stewart got so smitten with Hrithik Roshan that she accepted that if she’ll have a boy, she would want him to look like Hrithik.

She further added, “In fact, if I have a boy, I would want him to look like Hrithik Roshan, but with Rob’s (her then boyfriend Robert Pattinson) eyes.”

When Hrithik came to know about the comment, he felt elated and told NDTV, “It was a stressful day when I read this compliment, and it kind of brightened my mood and day, it was a very warm way to compliment someone. I felt a lot of warmth.”

Back in 2012, there was news about Hrithik and Kristen being starred together in Shekhar Kapur’s Paani. However, Hrithik didn’t confirm starring alongside Kristen in any project. He said, “No, I haven’t met her and there were talks of some projects in the past but nothing official yet.”

Shekhar Kapur then started considering late actor Sushant Singh Rajput for Paani but the movie was shelved and was never made. Hrithik later starred in Zindagi Na Milegi Dobara and War while Kristen is one of the most talented young stars of Hollywood.