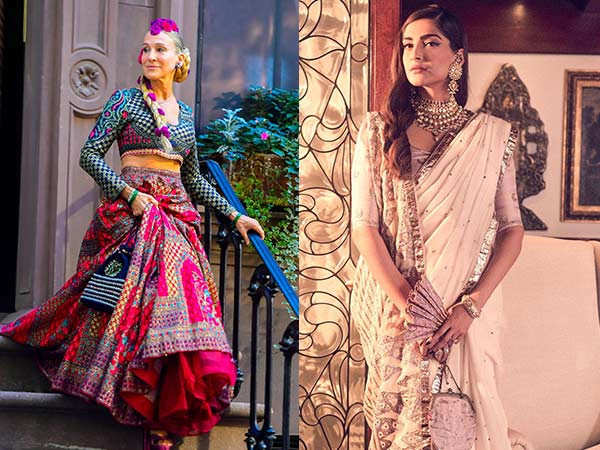 he internet has been divided ever since their beloved character, Carrie Bradshaw, played by Sarah Jessica Parker made a fashion faux pas on And Just Like That. In a scene. Carrie is shown prepping for a Diwali party and she visits her friend Seema who owns a store in Manhattan. While it was a big moment to just see the evolution of Indian fashion and where it’s reached, the show caused a bit of a controversy when it indirectly referred to a lehengas as a sari.

Carrie is seen wearing a beautiful lehengas by Falguni and Shane Peacock in the scene and she accessories it with a rose mohawk and a long braid. This scene did not go well with the audience who believed it was a great moment for Indian couture and the fashion icon missed the chance to educate her audience on the ethnic number.

Lending some clarity on this, Sonam Kapoor, who is the one person whose fashion advice and opinion we do not miss shared a post by Imran Amed. In the post, he explained, “In yesterday’s episode, Carrie attended a Diwali party with an Indian character named Seema, played by Sarita Choudhury. Carrie asked if it would be appropriate to wear a sari. Bring it on, I thought! One of the joys of attending Indian cultural events and special occasions are the colours and textures of our clothing. The issue is that there are now millions of people out there who think what Carrie is wearing is a sari. It’s not.”

Furthermore, he added that it was not cultural appropriation to wear the lehenga, but calling it a sari did ruin the moment, “A few of you asked if I thought it was okay for Carrie to wear Indian clothes as a form of “cultural appreciation.” Personally, I think it’s really cool. The world has already adopted yoga, Ayurveda, turmeric … why not our clothes too, if done respectfully and accurately? And as for the last question, lehenga is pronounced luh·heng·guh.”

You can read the entire entry below.