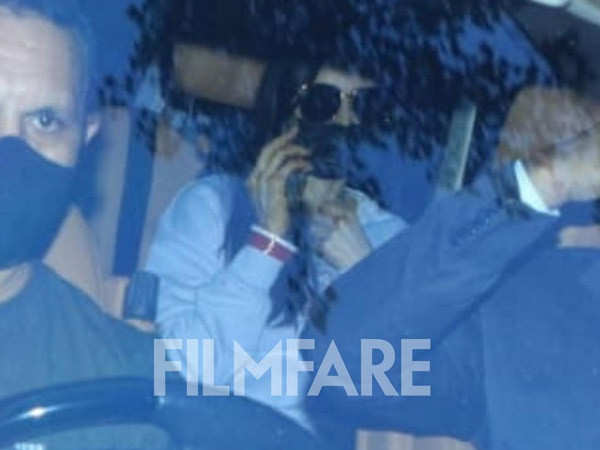 Katrina Kaif on Monday visited her in-laws, Sham Kaushal and Veena Kaushal’s house in Mumbai. Katrina and Vicky have moved into their new home and are Anushka Sharma and Virat Kohli’s neighbour. But the newly weds have been visiting Vicky’s parents since they have returned from their wedding in Rajasthan.

In the pictures, Katrina can be seen sitting in the backseat of the car in a grey sweatshirt. She was spotted talking on a mobile phone and wearing a red chooda on her wrists. She opted for dark sunglasses, black mask and kept her hair loose.

Earlier on the same day, both Vicky and Katrina treated their fans with a beautiful picture on their social media. As the picture was clicked on the balcony, it also gave a glimpse of the sea view from their home.

Katrina and Vicky shifted to their new home and carried out their house warming rituals on Sunday. The couple has been giving a sneak peek into their married life to fans through social media. Earlier, Katrina posted a picture on her Instagram handle, showing her Mehandi adorned hands.