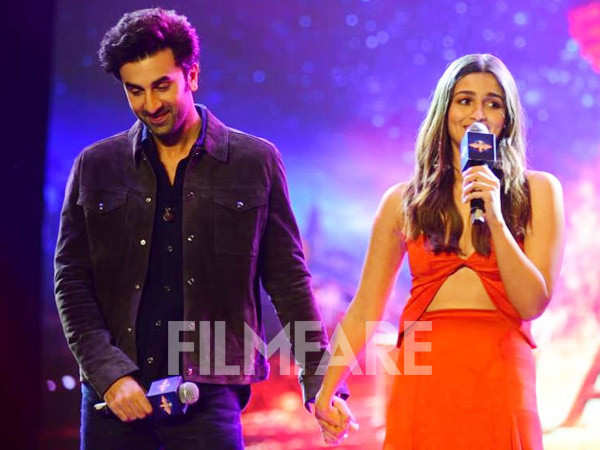 Ranbir Kapoor, Alia Bhatt and filmmaker Ayan Mukherji attended the launch event of Brahmastra’s motion poster. Brahmastra is also the first movie in which Alia and Ranbir will be seen together. During the questioning session, a fan asked Ranbir Kapoor about when he plans to marry Alia. “When will you marry Alia or someone else?”, Ranbir read the question aloud and left the audience cheering. The question also left Alia’s mouth open in wonder. Ranbir replied, “Well, haven’t we seen a lot of people getting married in the last one year? I think we should be happy with that. Humari kab hogi?” To this Alia said, “Why are you asking me?”, Ranbir then pointed at filmmaker Ayan Mukherji and said, “I am asking him, hamari kab hogi?”, to which Ayan said, “Aaj ke liye ek hi date kaafi hai, Brahmastra ki release date. Let’s wait.”

Ranbir and Alia have been dating since 2017 and even go on vacations together. Both of them also bond well with each other’s families. In an interview last year, with a renowned journalist, Ranbir had said, “I don’t want to jinx it by saying anything. I want to mark that goal very soon in my life.” The first part of Brahmastra revolves around the character of Shiva, played by Ranbir Kapoor. Alia will be portraying his lady love Isha. The movie also stars Amitabh Bachchan, Mouni Roy and Nagarjuna Akkineni. The movie is scheduled to have a theatrical release on September 9, 2022.