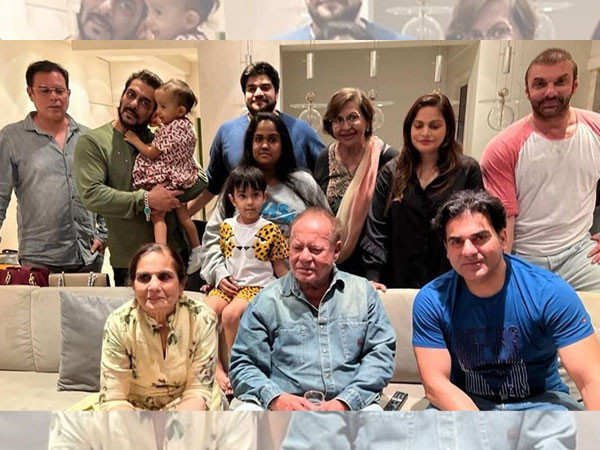 Salman Khan shared a picture from his father Salim Khan’s birthday party which he captioned as “Happy b’day dad.” The entire family except a few people graced the party.

In the picture, Salman can be seen holding his niece Ayat while posing alongside other Khan Family members- Salim Khan, Helen, Salma Khan, Sohail Khan, Arbaaz Khan, Arpita Khan and her son Ahil, Atul Agnihotri, Alvira Khan and their son Ayaan. Two cakes were kept on the table in front of them.

Currently, Salman is busy promoting his upcoming film Antim: The Final Truth. The movie will also feature his brother-in-law Aayush Sharma. Salman will be seen in the role of a police officer while Aayush is essaying the role of a gangster in the movie.

In an interview with a leading news portal, Aayush said that he was apprehensive of the fact that Salman was a part of the movie. He said, “There are going to be multiple notions about it including the fact that we are a family, he is making this film to help me in my career and also to spark another conversation on nepotism.”

He went on to inform that he was opposed to the idea of featuring alongside Salman and he even approached every member of the family, including his wife Arpita, to convince him to drop the film. But Salman was determined to be a part of Antim: The Final Truth.

Produced by Salma Khan and Presented by Salman Khan, The movie will be having a theatrical release on November 26. It will also mark the Bollywood debut of Mahima Makwana.