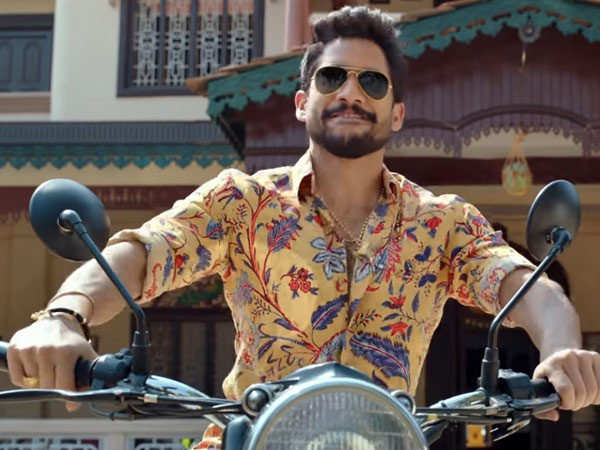 The first look of actor Naga Chaitanya in his father, Akkineni Nagarjuna’s wholesome family entertainer Bangarraju was released yesterday to tremendous response. His stylish look impressed many. Today, wishing the actor on his birthday, the makers have released the teaser of the movie.

The video shows Naga Chaitanya wearing all the ornaments of Bangarraju played by Nagarjuna which were placed in front of the latter’s huge photo frame. Then, he comes out stylishly and hits cattle stick on ground that settles on his Royal Enfield bike. He gets a bit emotional as he starts the bike. This teaser brings back the memories of Soggade Chinni Nayana and we too feel nostalgic like Naga Chaitanya.

Naga Chaitanya looks perky in the teaser and Anup Rubens background score further beautify the visuals. Yuvraj’s cinematography and rich production values are the other big assets. The teaser surely hikes prospects on the film which is presently being filmed in Mysore.

Nagarjuna and Naga Chaitanya are sharing screen space together for the second time, after the memorable film of Akkineni family, Manam. The father-son duo created magic with their wonderful chemistry in Manam and it will be a treat to see them together in another special film Bangarraju, which is a sequel to Nagarjuna’s biggest blockbuster Soggade Chinni Nayana.

Bangarraju will also feature Ramya Krishna and Krithi Shetty opposite Nagarjuna and Naga Chaitanya respectively. Krithi’s first look as village belle Naga Lakshmi that was released recently by Naga Chaitanya impressed one and all.