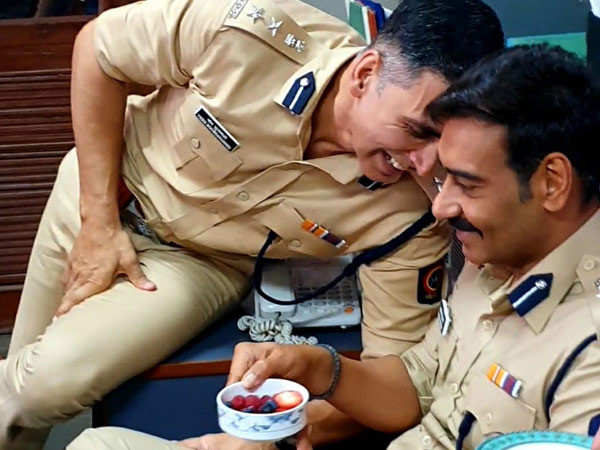 Monday, November 22,  2021, marked the completion of 30 years of the release of Phool Aur Kante. Its lead actor Ajay Devgn also completed three decades of being in the film industry. Ajay’s team ‘Ajay Devgn Films’ is celebrating and observing this day as ‘Ajay Devgn Diwas’ while the actor received greetings and wishes from his colleagues in the industry. To start with, the legendary Amitabh Bachchan himself wished Ajay on the 30th anniversary of ‘Phool Aur Kante’ and wrote, “#AjayDevgn, completes 30 years in the Film Industry, on 22nd Nov, when his film ‘Phool aur Kante’ released. Soft spoken, non interfering, yet filled with passion. My congratulations Ajay, may you continue for another 70.” Replying to Big B, Ajay wrote, “Sir, Thank you for your blessings. Ajay”

Akshay Kumar also congratulated his dear friend while sharing a throwback picture from the set of ‘Sooryavanshi’ and wrote, “Mujhe yaad hai when as newbies, main aur tu saath saath Juhu beach pe martial arts practice karte the when your dad used to train us. Kya din the yaar @ajaydevgn, and just like that it’s been 30 years to #PhoolAurKaante. Time flies, friendship stays!” Ajay replied to Akshay’s tweet as,“Thanks Akki, we’ve shared a long innings. And, I’m happy & grateful for your presence alongside.”

The evergreen Anil Kapoor also wished Ajay through his tweet. “Was there to wish you on your premiere night…saw your close up and your eyes as soon as I entered the auditorium and I just knew he’s a star. congratulations on 30 years @ajaydevgn”, wrote Anil Kapoor. On this occasion, the ‘Singham’ also reposted a video made and posted by his team on twitter and captioned it as, “My team made me repost this. But, thank you for all your love. Dua mein yaad rakhna…(remember me in your blessings).”

Ajay’s production house, Ajay Devgn Films, had posted this video with the caption, “We thought of wishing the man himself but his swag was too hot to handle! #AjayDevgnDiwas @ajaydevgn.” In the video,a team member could be seen entering Ajay’s vanity Van and congratulating him with a toffee for completing 30 years in cinema. The actor replies, “I have just started warming up. Duaao me yaad rakhna).”