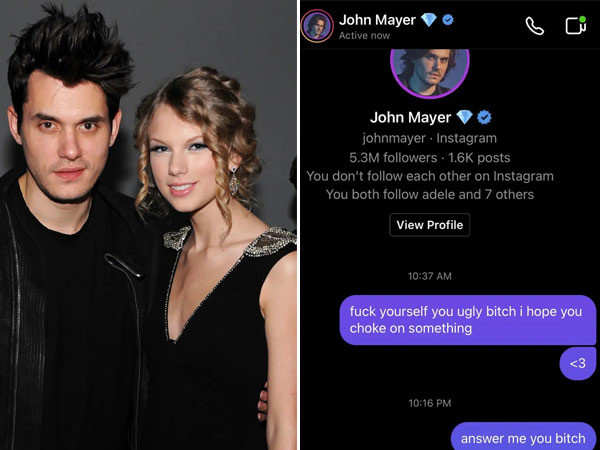 It is not uncommon to see stans of a particular celebrity behave in a toxic manner on social media. Journalists have received death threats from anonymous fam accounts for writing negatively about a celebrity. Now, musician John Mayer has responded to a Taylor Swift fan who asked him to “choke on something”. For those who are unaware, Taylor Swift and John Mayer dated briefly in 2009 and 2010. Fans of Taylor Swift believe that John Mayer was a toxic boyfriend and the age difference between the two also made people uncomfortable – Taylor was 19 and John was 32 when they allegedly began dating.

Now, as Red (Taylor’s Version) releases, fans of Taylor (called Swifties) have taken to attacking many of the singer’s exes including John Mayer and Jake Gyllenhaal.

“f** yourself you ugly b***, I hope you choke on something,” was the message that a Swiftie sent out to John Mayer on Instagram. The person did not expect John to reply to her and was aghast when he did. “I’ve been getting so many messages like these the past couple days,” John replied after Alondra dared him to “reply” before calling him a “b**ch.” “I’m not upset. I just tend to have a curious mind and feel compelled to ask. Do you really hope that I die?” John Mayer wrote back.

“OMG WHAT, I don’t want you to DIE,” the fan responded before sending a voice note claiming that it was a dare. “So it’s a fun thing people are doing without taking into account that I might see it and be affected by it?,” John asked and the fan said that “yeah, i guess nobody really thought you would see it or answer since you are famous and don’t interact with random people.”

Following this, John wished the fan well but the fan took to their TikTok account to share screenshots of the chat. Naturally, people began reacting negatively towards the fan who then went private on Twitter after tweeting that she was only 15 years old and that “lets not send death threats to me”.