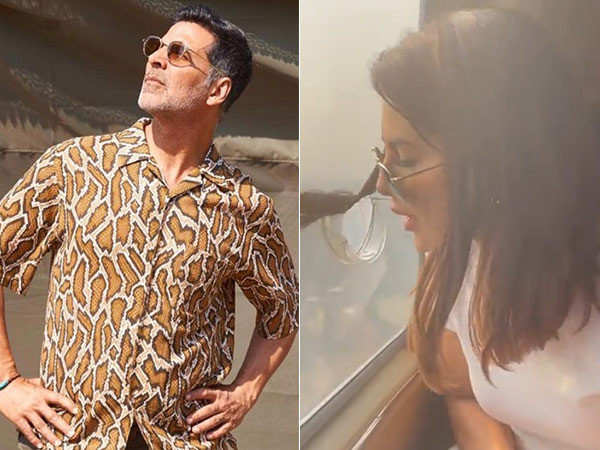 Akshay Kumar is one of the craziest superstars on a set. Currently he’s shooting with Jacqueline Fernandez for Ram Setu and Jacqueline too is known for her jovial nature.

Akshay Kumar took to his social media today and shared an adorable video of Jacqueline in the helicopter on their way to shoot. In the video we see the heavy breeze giving a natural curl to Jacqueline’s hair. Akshay Kumar captioned this video saying, “Ladies, here’s a hack for y’all courtesy Jacqueline Jugaadu! Watch and learn how to curl your hair mid-air in a helicopter. @Aslijacqueline” Now that’s hilarious.

Akshay Kumar and Jacqueline Fernandez have worked together in several films – Housefull 2 and 3, Dishoom and Brothers. The two will be seen in Ram Setu and also in Bachchan Pandey which they have already shot for it. Akshay Kumar who’s on a film-shooting spree is currently shooting for Ram Setu and has a dozen of films in the pipeline for release. We must say that 2022 is a year filled with Akshay Kumar releases.

Ladies, here’s a hack for y’all courtesy Jacqueline Jugaadu! Watch and learn how to curl your hair mid-air in a helicopter ðÂÂÂðÂÂÂðÂÂÂ @Asli_Jacqueline pic.twitter.com/dqWtZLMUAo