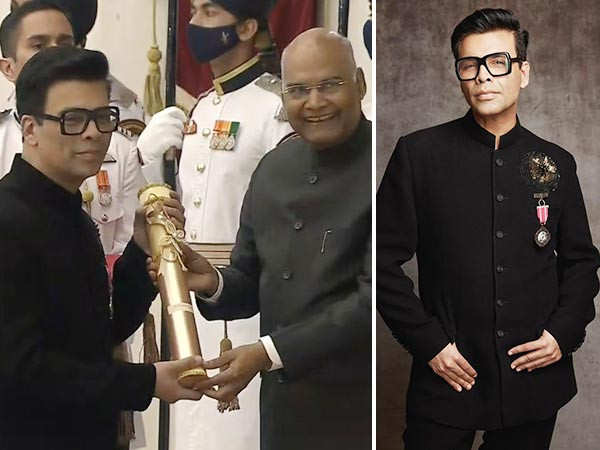 Karan Johar, Kangana Ranaut, Ekta Kapoor, Adnan Sami and many more were honoured with the Padma Shri award last evening in Delhi – the fourth highest civilian award in our country. To be conferred with this honour is a big achievement and no wonder Karan Johar got emotional with his big win.

Karan Johar took to his Instagram and shared a couple of pictures where we see him flaunting the badge. He penned down a note where he says that if his father and producer Yash Johar was present today he would have been very proud of him. He further added that his babies – Yash and Roohi asked him about the badge and he had a sweet reply to them.

His caption reads, “About last evening…. A truly memorable moment in my life….. I knew I would have made my father so proud and was so happy to have my mom there by my side…. My babies asked me “ dada you won a medal? “ and I replied “yes I did I hope you do too one day “!! The #padmashri … Humbled and honoured. thank you @manishmalhotra05 for styling the evening for me ….” Now that is truly sweet.

Karan Johar is currently also busy filming his next Rocky Aur Rani Ki Prem Kahaani which has some of the biggest stars – right from Ranveer Singh, Alia Bhatt to Dharmendra, Shabana Azmi and Jaya Bachchan.