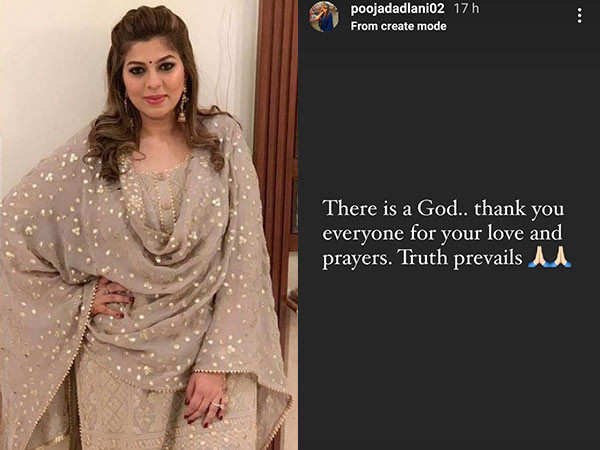 Shah Rukh Khan and Gauri Khan finally have reasons to smile as their son Aryan Khan got his bail sanctioned by the High Court last evening. SRK’s fans rejoiced with the news and even celebrated in front of the actor’s residence Mannat in Bandra (Mumbai). While Shah Rukh Khan and Gauri have kept their silence since the beginning of the case, the superstar’s manager Pooja Dadlani has something to say.

Pooja Dadlani was always seen attending hearings at the court and running around during the Aryan Khan case. Pooja last evening took to her social media and penned down a small note of gratitude on her Instagram story. She said, “There is a God…. thank you everyone for your love and prayers. Truth prevails.” Now that’s really sweet. Throughout these tough times, the SRKians (the superstar’s fans) constantly prayed for him and showed strong support on social media. Shah Rukh Khan visited Aryan Khan only once last week, when his son was in Arthur Road jail.

Aryan Khan was caught by the NCB on October 2. The case went on for a long time keeping the superstar and his family in tense situations. The legal team of the actor released a statement that said, “Aryan Shah Rukh Khan has ultimately been released on bail by the HC. No possession, No Evidence, No Consumption, No Conspiracy, Right from the First Moment when he was detained on 2nd Oct 2021 …. Nor is there anything as of now.”