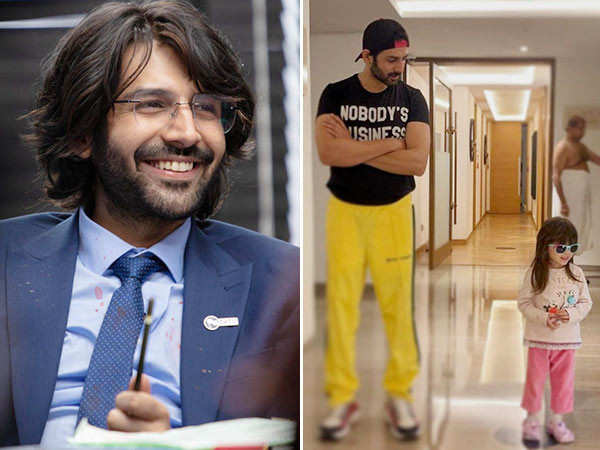 Usually the hunks of b-town take to their shirtless selfies or gym clicks to grab our attention, but Kartik Aaryan has his own quirky ways to get our attention. Last evening he took to his social media account to share a cute click with a tiny tot.

In the picture we see Kartik in casuals with his printed tee saying – Nobody’s Business and with a cap on. He has his hands folded and is looking at a cute adorable tot with intrigue. Beating the hunk’s swag is this cute little one in pink clothes and with stylish shades on. However this picture perfect frame doesn’t get perfect as a photo bomber walks in. Now we all have been in this relatable situation and Kartik’s similar dilemma leaves us in splits. The actor’s photo bomber is an uncle who’s probably just out of shower with a towel wrapped around his waist. The actor has blurred the man’s face and captioned the click saying ‘Photo bomb.’ Now isn’t that a hilarious post.

Meanwhile this tiny adorable tot has made an appearance on Kartik’s feed earlier too. Few weeks back when the actor was in the mountains, he had a picture from a hotel lobby with the adorable tot and captioned the click – Bade Miyan Chote Miyan. Looks like Kartik has found yet another loyal fan.

On work front Kartik Aaryan is currently shooting for Shehzada – a film by Rohit Dhawan. A lot is already talked about this one and the actor has already piqued his fans’ curiosity for it. Apart from that he will be seen in Dhamaka up for release in the coming weeks on an OTT. The trailer sees the actor in a never-seen-before avatar and he blows our minds in the trailer. Bhool Bhulaiyaa 2 and intense drama Freddy are also in the pipeline.