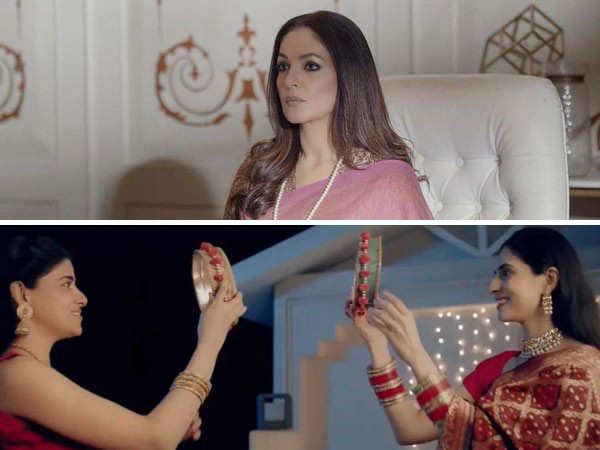 Filmmaker Pooja Bhatt has slammed one of India’s biggest multinational consumer goods company after it tendered an apology and withdrew an advertisement featuring a lesbian couple celebrating Karwa Chauth. Madhya Pradesh Home Minister Narottam Mishra also received an apology from the company after he criticised the advertisement. “Bas yahi karte raho (keep doing this).. slam, bam, ban! So much for being the ‘Mother’ of democracy! Pity a giant like #Dabur refused to stand behind their AD. While I don’t endorse a fairness cream in principal I reserved my comment as they attempted to celebrate Inclusivity & #PRIDE So why hide now?” Pooja Bhatt wrote on Twitter.

The advertisement for the product showed a lesbian couple celebrating Karwa Chauth together. As part of the ritual, married women keep a fast on that day for the safety and long life of their husbands. The advertisement had been shared on the company’s social media portals and has now been removed. “Fem’s Karwachauth campaign has been withdrawn from all social media handles and we unconditionally apologise for unintentionally hurting people’s sentiments,” the brand wrote on Twitter.

“I had asked to send a warning to withdraw the advertisement before registering an FIR for hurting religious sentiments. It’s good that they withdrew the advertisement and also tender apology for that,” said Madhya Pradesh Home Minister Narottam Mishra to a leading daily.

“I consider this a serious matter. More so because such advertisements and clippings are made on the rituals of Hindu festivals only. They (the advertisement) showed lesbians celebrating Karva Chauth and seeing each other through a sieve. In future, they will show two men taking ‘feras’ (marrying each other according to Hindu rituals). This is objectionable,” he had said in a statement on Monday.