Samantha Shaakuntalam and Success: A candid chat with a superstar actress

Samantha, Shaakuntalam and Success: A candid chat with a superstar actress 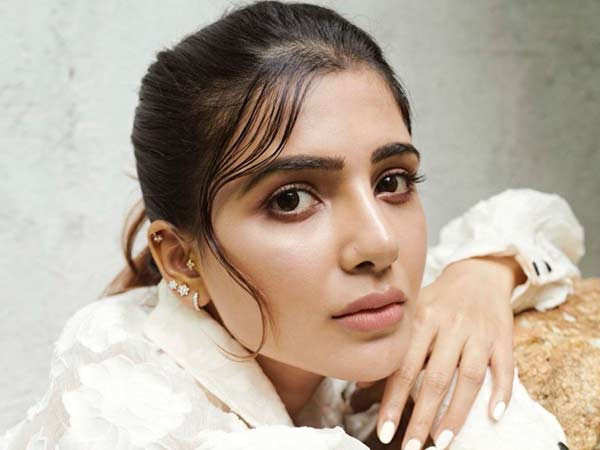 Thanks to the success of The Family Man, South superstar Samantha is now hot property up North too. Mayukh Majumdar converses with the fiery actress in this exclusive interview.

Samantha began her professional film career with Gautham Menon’s Telugu film, Ye Maaya Chesave (2010). After cementing her name with critical and commercial hits like Eega (2012), Neethaane En Ponvasantham (2012), Manam (2013), Theri (2016), A Aa (2016), Rangasthalam (2018), U Turn (2018), and Super Deluxe (2019) down South, she wowed the North Indian audience with her commanding performance in the series The Family Man 2 (2021). She’s playing Shakuntala in the mythological drama Shaakuntalam, based on Kalidasa’s immortal poem of the same name. A mythological film is a first for her and she’s looking forward to its release. She had a great time collaborating with ace designer Neeta Lulla on this costume drama. Presenting excerpts from a heart-to-heart conversation with the superpower from South who has become a pan-India sensation…

The second season of The Family Man premiered some time ago but people are still talking about it. Did you ever anticipate the kind of response you’ve received for Raji?

I knew that I was doing something special but I don’t think anyone expected it to blow up the way it did. Especially because, even before the show was released, it wasn’t smooth sailing, so I’m just thankful for the final result.

Right from the beginning of your career, you’ve experienced massive success. do you think that Raji has given you pan-Indian success?

Yes, I was surprised at the amount of love and appreciation that came from the North. I’ve always worked in the South and I expected my fans to react to it but I was extremely pleased and humbled at the immense appreciation I’ve received from throughout the country. It just inspires me to work harder.

Shaakuntalam is one of our most loved poems and you’re playing the lead role in this.

(Laughs) Oh my god! Okay no pressure, no pressure. I have always liked choosing films that are completely different from my previous work. Shakuntalam is the extreme opposite, the other side of the spectrum from Raji. Every shot is perfect, every frame is a painting. I had to look the most beautiful that I’ve ever looked! So that pressure was there. It was fascinating. I’ve always been obsessed with mythology, period dramas, and this princess world. I really loved my dream role with Shaakuntalam. I’ve been a Disney fan all my life and Shaakuntalam is everything I could have wished for. In some shots, I can’t believe that’s me… actually, in a lot of shots I can’t believe it’s me! The team has done such a fantastic job from production design, costumes, lighting, and makeup. I just had to show up.

With all my work, it’s not like I know what I’m going to do before I do it. Even with The Family Man and Raji, I was absorbing what the director was telling me or what I was watching online. I don’t decide what I’m going to do when they say ‘action’. I never do that. At the same time, after they say ‘cut’, if you ask me to relive the scene I can’t do it. For me, everything happens between ‘action’ and ‘cut’. But I do absorb when someone is narrating a script, watching them narrate it, watching Neeta Lulla talk about her costumes. I read up on Shaakuntalam though. (Laughs) I don’t know, something happens when
the director calls ‘action!’ But I did work on my physicality a lot for this film, I think although the original Shakuntala didn’t really have six-pack abs but I did work a lot on my physicality because there were a lot of beautiful clothes that were being put on me and I wanted to be the perfect mannequin for them. I worked on myself to make sure those clothes looked good on me. So I wasn’t concentrating on sucking in my stomach and delivering my dialogue. That was the main focus – that I looked comfortable in those clothes. It often happens, when you show your midriff, you suck your stomach in and deliver your dialogue and that looks extremely awkward on-screen. I didn’t want that to happen. Once I went there, I dived right into the fairytale.

I’d sleep and wake up groggy and go to work. I’d make coffee for myself and then she’d put me in one of her looks and I’d immediately feel like a princess. I really didn’t have to do anything, she is so amazing at her craft. She’s made such iconic looks in the past and it’s been such an honour to work with her. With Shaakuntalam, her looks are so original, you’ll never see this look and think ‘okay, this has been done before’. I’m in awe of her. After so many years in the business, she still pays attention to the smallest detail. It’s something commendable. I’ve been in the industry for 10-11 years and sometimes I tend to take things for granted. So I need to think, ‘okay let me focus on my acting and forget about the look’. But she taught me to never ever give up on the smallest detail.

Allu Arjun’s daughter, Allu Arha is making her big-screen debut with you in Shaakuntalam. Tell us how she was on the sets!

She was born to be a rockstar. Anything I say will just be an understatement of what that little girl has done. She was confident of herself despite there being 200-300 people on the set. She got her takes right on the first go. She speaks Telugu just so amazingly. She was born to be a superstar and I’m so happy that she made her debut with me because, many years down the line, she is going to rock this industry. Once you see the film, you’ll completely agree with me.

Have you given serious thought to doing more Hindi projects?

Oh yes, I have said it before that initially I was intimidated because I was just finding my bearing in the South and getting a grip on the kind of films that work here and those that don’t. Now, with all the appreciation for The Family Man, it has given me more confidence to spread my wings and accept more challenges, whatever the language may be. So I’m definitely open to them right now.

What has been your relationship with social media like?

Social media has its great pluses and a few minuses. We are in the digital age and we cannot ignore it. Even if someone says ‘you know what, I don’t go on social media AT ALL’, I don’t think that’s necessarily a great quality that you have. I think whatever may be your habit, it has to be in moderation and only till you are in control. Which is why, when you asked me that I do not react to trolls, I am still in control of the energy that I share on social media and I think if I need to speak, it should be better than
my silence. It’s not just going to be a knee-jerk reaction.

Looking back at your career, is there any character or film you would have done differently?

Oh, so many. There’s a chunk of five years, I wish I could take back. So many of my films are shown on TV and I immediately turn off the TV. I don’t watch myself on screen.

Tell us about a look that you carried which you now wish you hadn’t.

Early on in my career, maybe 11 or 12 years ago, I did not know that I was wearing a rip-off of a designer. I really wish I hadn’t done that. (Laughs) I think it was Shehlaa Khan. At that point, I didn’t know anything about designers or designer wear. It was probably my first or second public appearance. So yeah, that was a baaaaad choice.

What is the one question you hate answering in interviews?

I hate answering? I mean you know, when people ask you a question acting like they care but they’re just looking for their next headline? Yeah. Those kinds of questions, I think, are extremely inhumane.

And you can always figure it out?

Yeah yeah, completely. Even when they’re asking that question, I know they are looking for their headline. So, it’s okay. Two can play this game.