Kartik Aaryan and Kriti Sanon gear up for Shehzadaâs shoot

Kartik Aaryan and Kriti Sanon gear up for Shehzada’s shoot 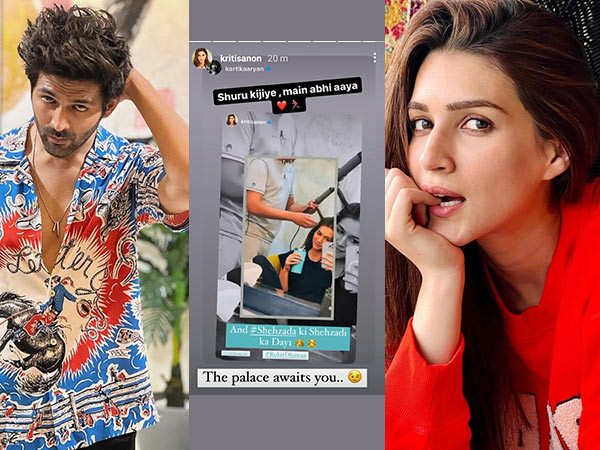 A few days back Kartik Aaryan officially announced his next Shehzada.Joining him in the film is his Luka Chuppi co-star Kriti Sanon and the two are starting work on it from today. Kriti Sanon took to her social media and shared a video where she is seen getting her hair done in a vanity van.

She captioned it saying – ‘And Shehzada ki Shehzadi ka Day 1.’ Now it looks like Kriti is all excited for her new project. As soon as she posted this, Shehzada aka Kartik reposted the story and replied to her saying – ‘Shuru Kijiye, main abhi aaya,’ and added a red-heart emoticon and a running-man emoji. Reading Kartik’s reply Kriti reposted it and said – The palace awaits you.

Woohoo! Now we can’t wait for it any longer. Shehzada seems to be the perfect entertainer with all the romance, action and comedy. And witnessing Kartik and Kriti’s chemistry and comic timing in Luka Chuppi, we are assured that we are in for some great entertainers.

Kartik Aaryan and Kriti Sanon both have a packed schedule at the movies. While Kriti has Adipurush, Hum Do Hamare Do and Bhediya, Kartik too has a dozen of films like Dhamaka, Shehzada, Freddy, Bhool Bhulaiyaa 2 and Captain India. Phew!