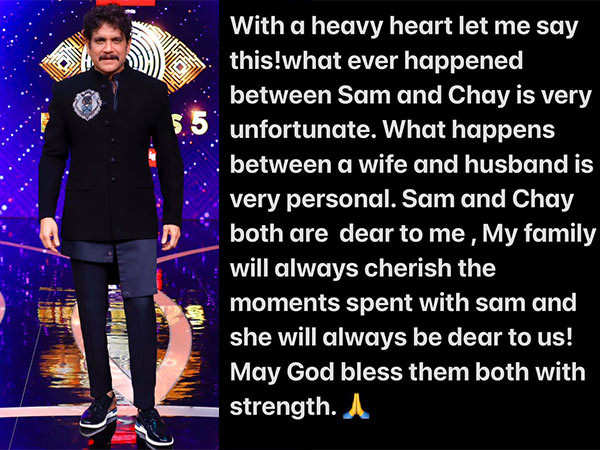 The South industry fans were in for a rude shock last evening when Samantha and Naga Chaitanya both made their separation official. For weeks there has been a lot of speculation about their marriage, but yesterday they finally spoke about it.

While both the actors released a statement and announced their separation, Chay’s father Nagarjuna too took to his social media and shared his views. The actor shared a statement that said, “With a heavy heart let me say this! Whatever happened between Sam and Chay is very unfortunate. What happens between a wife and husband is very personal. Sam and Chay are both dear to me. My family will always cherish the moments spent with Sam and she will always be dear to us. May God bless them both.” Very well put by the superstar to calm the internet and #ChaySam fans, who are deeply upset for their favourite couple’s mutual decision.

Samantha and Naga Chaitanya’s statement read that they have mutually decided to part ways but they still hold the special bond between them. They even asked their fans and media to support them during these difficult situations and give them some privacy.

Samantha was last seen in The Family Man Season 2 and the actress’ performance was loved by all. Naga Chaitanya just had a theatrical release last week titled Love Story which paired him with Sai Pallavi. The film has been doing well and the actor is praised for his phenomenal acting in the film and his chemistry with Sai Pallavi.