Rakul Preet Singh on how her childhood prepared her for stardom

Rakul Preet Singh on how her childhood prepared her for stardom 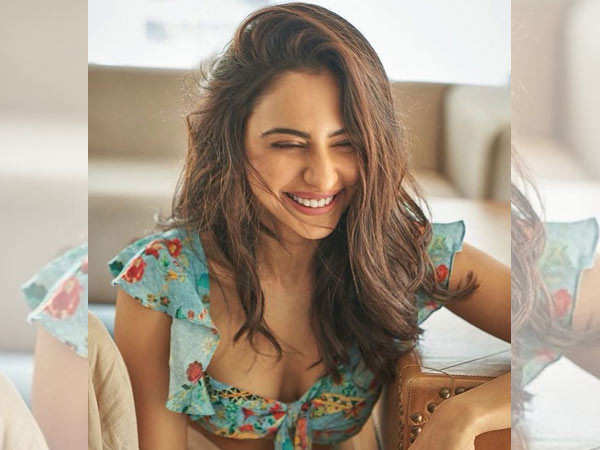 Rakul Preet Singh grew up as an army kid and hence led a pretty nomadic life. She tells Analita Seth that her growing-up days prepared her for the hustle-and-bustle of being an actor

As Robert Frost has said — Home is the place where, when you have to go there, they have to take you in. That’s pretty much what the pretty Punjabi actress Rakul Preet Singh feels about home. She’s been active both in the Hindi and in the South industries and has been living out of her valises for a while now.  As her father was in the army, she had to move to a different place every three years. She grew up to be quite a detached individual because of that. The walls, the furniture, the surroundings don’t translate into home for her. Home means the warmth of her mother’s embrace, the strict discipline of her father and mischievous laughter of her younger brother. Incidentally, her last release, Sardar Ka Grandson, revolved around an old woman’s obsession with her home in Pakistan and how her grandson vows to transport it back to India. Working in the film made her feel nostalgic about her own grandparents. She could relate to their stories about pre-Partition days. Also, it brought back feelings about her own rootless childhood. Excerpts from an introspective interview where the actress looks back on the film and her own growing-up days with affection…

What’s the one thing about Sardar Ka Grandson that intrigued you the most?
My grandparents, both maternal and paternal, had come to India after the Partition. I’ve grown up with stories of that era. My paternal grandfather was sixteen years old when he crossed over to India so his entire schooling had taken place across the border. They used to tear up talking about how they had to leave their friends behind, leave their homes behind. They shared so many bitter-sweet memories about their past lives. He always cherished the dream to go back to his native village and visit his ancestral house at least once in his life. Unfortunately, we weren’t able to fulfill that wish as my father was serving in the Indian Army and it was difficult to get a Pakistani visa. By the time my father retired, my grandfather was too old to travel. So when I heard the script, it felt like my grandparents’ story. I couldn’t take my grandfather to Pakistan but I felt doing this would make him happy. Unfortunately, we lost him around two years back when I started shooting for it. Hence, Sardar Ka Grandson was an emotional journey for me in so many ways.

Was there any scene in the film that reminded you of your own family?
That madness that abounds in any Punjabi family was captured beautifully in the film. They are a little loud, some are even messy, there’s chaos, there’s love and it’s a big fat Punjabi family. I think each one of us, not just me who has grown up in the Northern belt, will be able to associate with someone or the other in the film. They love, they fight but they all stick together. I think that’s what every family is like.

How was it working with Arjun Kapoor?
Arjun is someone who brings in a lot with him. He is spontaneous and loves to improvise. For instance, in our first two scenes together, where we were having a lover’s tiff, we both were improvising a lot. Of course, we had the actual dialogue to fall back on but decided to just go with the flow. It was a lot of fun to work with him. He loves to make you laugh and keeps pulling everyone’s legs. There were times when I had to tell him to stop because we were doing a serious scene.

What is your most cherished memory of shooting Sardar Ka Grandson?
There was never a dull moment during the entire schedule. One thing I’ll never forget is driving that truck with the house on it. To go forward and then reverse in a small lane, it was insane. We were driving on the roads of Patiala and people were staring at us like we were aliens. That’s something
I’ll never forget.

Do you wish the film had a theatrical release?
Yes. Definitely. The big screen has its own charm. Every emotion comes out grandly. But OTT is not bad, it serves as a great platform. The reach is so much more. Not just Indians, people across the globe can access your films. So both have their own positives and co-existence between mediums is the future.

Neena Gupta’s character was in love with her old house in Lahore. Do you feel the same way about your own house in Delhi?
My parents have kept all my old toys in my old room at our house in Delhi. A lot of memories come rushing back when I see them — how my younger brother and I would fight over them, how I would scare him… things you suddenly have a flashback of when you go back home. There is also this frame that my college friends hand painted and wrote messages on in 2009 for my birthday. We were a group of five so my four friends had made that and it’s still there in my room. Whenever I look at it, it’s hard to believe it’s been eleven years since I’ve been away. It’ll always remain close to my heart. More than physical memorabilia, I like to keep memories in my mind. I’m a little old school like that. In today’s day and age, we have forgotten to live in the present. We are constantly trying to capture the moment and forget to actually make memories. So I prefer to absorb the present rather than click pictures or hold onto things.

Did the moving around that came with your father’s profession ever take a toll on you?
It does affect you but that was our normal. Earlier, if someone told me they lived in the same place for a decade, I used to find that strange as we moved houses every two-three years. If someone told me they studied in the same school all their lives,
I thought that was quite boring. Because they’d only have one set of friends, one set of memories. I’ve changed ten schools.
I do remember this one time, when I was in the fourth standard and we were posted in Jalandhar — it’s the age you just start making friends. My father got transferred to Maharashtra within a year and I cried a lot. I found it so unfair because we would at least stay two to three years at one station. Dad told me we were going to Deolali. To make me happy he said there’s going to be paragliding there so
I calmed down. I’m grateful for the exposure we got because of the nature of his job.

Speaking of family, if there ever were to be a film on your life, who would you want to see play your parents and brother?
We’ll keep everyone as it is and do something like Masaba Masaba. It’ll be a lot of fun.

Has anyone from your family ever expressed an interest in acting?
My younger brother Aman Preet Singh is starting out as an actor. My family has no clue about what my job entails. He’ll finally know how easy or difficult the job is.

What do you like and dislike about virtual interactions during the lockdown?
I obviously miss meeting people in person. It’s nice to touch base with people on a one-on-one level. But it’s convenient, you’re sitting at home, probably in your pyjamas, doing a video call and you’re comfortable. Your makeup can be easy, you save time but yes, you miss the real deal.

You also started a series on your social media, Chronicles of Rakul. When did you decide to share the adventurous side of your life?
I wasn’t planning on it but I have been a believer of the fact that social media is for people to get to know the real you. There is so much that you can tell them besides sharing your pictures. About life, who you really are, how you deal with the highs and the lows. So Chronicles of Rakul was a way to show people that my life isn’t just tied to my profession. I’m not just an actor but also an adventurous girl who loves to explore the outdoors. You are literally nothing when you’re out in nature. Our existence is minuscule and we should not be stressing about anything in life. We are negligible on the face of this planet.