I was his Eklavya: Shabana Azmi pays tribute to the late Dilip Kumar

I was his Eklavya: Shabana Azmi pays tribute to the late Dilip Kumar 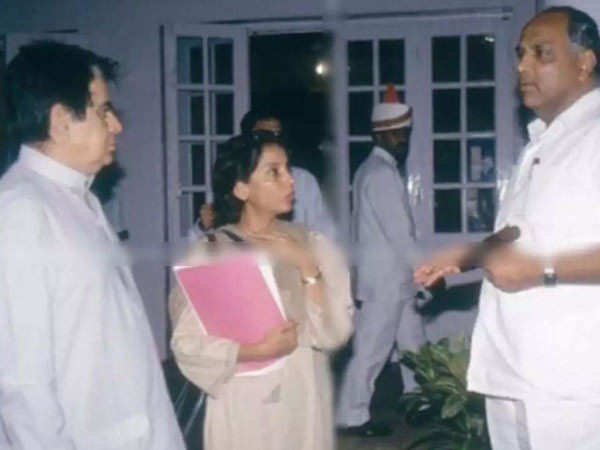 That Dilip Kumar was a great actor is as obvious as stating that the sky is blue and the grass is green. What is it that makes Dilip Kumar undisputedly the best? That he has left his stamp on generations of actors after him? That he introduced a style of acting which was unique to his times understated, deeply felt and ‘in the moment, remarkable in its stillness at a time when speaking dialogue in a theatrical way accompanied by broad gesticulation was the norm? That and so much more.

What is the measure for a good actor? Acting is not like a horse race where the one who runs the fastest is judged the best. A most definitive Hamlet can be a disastrous Othello. So the hallmark of a good actor is versatility and in that Dilip Saheb was supreme. Watch him as the swashbuckling hero in Aan, the tragic hero in Devdas or in varied roles as disparate as Andaz, Kohinoor, Mughal-e-Azam and Gunga Jumna. He could inhabit the world of any character he played, often at peril to himself… Legend has it that Dilip Saheb was so deeply impacted by Devdas that he had to seek the help of a psychiatrist to draw him out of the well of depression he had fallen into… He had lived the part, as Stanislavski says. I have no idea whether he had studied method acting. He did not go to any training institute but he became an institution in himself for generations of actors that followed him.

Acting is a very rewarding profession – you give yourself to the character you play; in turn the character leaves its imprint on you. The richer your personal experience, the broader your world view, the more depth you can give to the character. Dilip Saheb made an effort to expand his horizons and enrich his perspective on life – he read books, attended mushairas, learned to appreciate classical music, played football and cricket but above all he kept himself socially engaged as a citizen. Whether it was as a patron of National Association for the Blind, or mobilizing citizens for communal harmony, he was always in the forefront. And this was at a time when it was a rarity for film stars to be invested in socio-political issues. During the Bombay riots I watched him turn his house into a virtual relief and rehabilitation centre. It was a massive operation to deliver food everyday to the riot victims scattered in various relief camps all over the city, in times of curfew. He led like a General, ably assisted by his devoted wife Saira Banuji.

Today, I find that stardom confines stars within an ivory tower — with concentric circles of protective barriers – managers, secretaries,  PR companies, make-up artists, hairdressers, security guards etc that build an impenetrable fortress around them. How then, can they keep in touch with what is happening outside this rarefied circle?
An artiste’s resource base must be life itself and unless a special effort is made to stay in touch with the grassroots, there is a danger that the actor will lose out to the star.

Dilip Saheb undoubtedly was both…an actor and a star… his persona was formidable – erudite, refined and dignified. His roles were carefully chosen to keep that persona intact. He never stooped to chase his heroine in a manner that could even vaguely be interpreted as eve-teasing, he never cracked a low joke or indulged in double-meaning dialogue in the name of entertainment. He could be both enigmatic and accessible at will, a quality that served him well in the well-crafted characters he played.
Unknown to him, I was his Eklavya, I watched him from afar and learned many life lessons. I will always remain grateful…