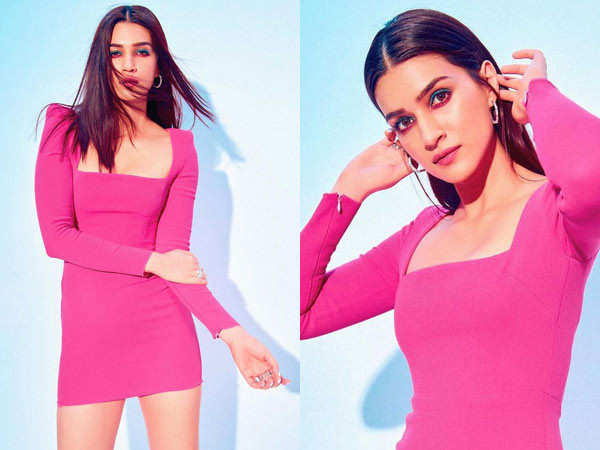 Kriti Sanon has been lauded by both the critics and the masses for her performance in Mimi. Despite being a comedy, it’s a sensitive film dealing with serious issues like surrogacy and women empowerment. It shows a small-town girl becoming a surrogate mother and later taking care of the child born of that surrogacy. By surrounding Mimi with woke parents and friends, it sends a hugely positive message. The actress poured her heart and soul into the role. It’s not easy for an actor to emote something outside of her experience. It was understandably difficult for Kriti to portray a pregnant woman. She reportedly put on 12 kgs for the role, which was emotionally draining as well. She does outright commercial films but in between makes sure to pick up something which satisfies the performer in her. The critical success of Mimi has shown that her instincts have been proved right yet again. Presenting excerpts from a heart-to-heart chat with the braveheart actor…

We were expecting you to collaborate with Laxman Utekar for Luka Chuppi 2. But you came up with Mimi. What excited you about this film?
Somewhere when the Luka Chuppi shoot had ended, Dinu (Dinesh Vijan) and I were taking a flight from somewhere and he just spoke to me about this film about a girl who wants to be an actress and she talks to Ranveer Singh’s poster and all that. There is this foreign couple who comes and asks her to be a surrogate mother, in return for money and she agrees. And for some reason later they don’t want the child. And I just felt goosebumps when he told me the story. I wanted to know more. The message that the film gives at the end just felt beautiful. I think I was somewhere mentally ready to lead a film. This came to me at the right point. It had everything. It had a big heart, soul, emotion… amazing scenes… like really performance-oriented scenes. But at the same time it also made me laugh a lot. We were not trying to crack jokes, there is comedy in the situation, in people’s reactions. I am sobbing in the scene when my mother is asking me — kiss ka bachcha hai yeh (whose child are you carrying)? My state of mind is very intense at that point and the moment I point at Pankaj Tripathi — his reaction made me laugh.

What are the things that are common between Mimi and you?
Both of us really believe in our dreams. Even I had a dream of becoming an actor. She genuinely talks to the posters. Her room is splattered with the posters of different stars. She tells them I am about to come to Bombay in no time, you just wait and watch. She is ambitious, she is a risk-taker. She faces her obstacles, her situations bravely. I could relate to her on all those aspects

You gained a lot of weight for Mimi’s character. How did you prepare yourself mentally for the role?
I did it by chewing my director’s brains, having lots and lots of conversations to know what the character is feeling at different points in the film. A lot of hormonal changes happen during pregnancy. I spoke to my mother about what all she went through, the whole cravings, which was the most difficult month kind of thing. I spoke to her about delivering… how painful it is. And she told me that she felt like ‘I was going to die on that bed.’ There were some pregnant women around me and I asked them about things like bladder control… or times when they couldn’t sleep because they couldn’t find a comfortable position. There are so many things that a woman goes through at that point of time. Laxman sir had told me he wanted the delivery scene to be as real as possible. It was going to be a long scene where the difficulty a mother faces while delivering would be highlighted. If you notice, it doesn’t have any background score in it. The camera is totally focussed on my reactions. I saw a lot of actual delivery scenes… so much so that I am actually now petrified of delivering a child. And you know Mimi was a surrogate mother who decides to keep the baby even when the couple she was having the baby for backs out. So a lot was going on in my character’s mind and I had to portray all of it without dialogue. There is anger, there is hurt, there is frustration. Her dreams have been shattered. But she decides to become a mother all the same because something sacred has awoken inside her. There was a scene where she completely breaks down and I was sobbing even after the director said cut. Laxman sir was shocked by my intensity and gently asked me to let it all go and snap out of it. The film took an emotional toll on me.

Mimi is a big Bollywood fan. She loves Ranveer Singh. Like her, do you have a favourite as well?
I have always been a Madhuri Dixit fan. I have grown up watching her stuff. Performing on her songs. I have had Hrithik Roshan posters in my room. I have been a Shah Rukh Khan, Salman Khan fan at one point. Obviously when you meet people and talk to them… it just becomes different then. It’s not the same thing. But I have not been star struck. But yes, even today when I watch any great performance, it makes me a little bit of a fan of them.

You remind us of Madhuri Dixit in the song Param sundari.
That’s a huge, huge compliment. I don’t think anyone can touch her, I think somewhere I have always copied her. For me dancing is not just about the body and your adas.
It has a lot to do with your face also.

You are doing movies like Mimi and then you are doing big commercial films like Bachchan Pandey. Is it a conscious move on your part to balance things out?
I don’t want to be put in a bracket. I don’t want people to think achcha, isski film hai toh aisi hee hogi. I don’t want that. I like watching all kinds of films as an audience… I also like to do various kinds of films as an actor. And I think Mimi is as commercial as Bachchan Pandey. I’m glad I’m getting films like Mimi, Bachchan Pandey, Hum Do Hamare Do, Bhediya or Adipurish where I can showcase my versatility.

When can we expect Luka Chuppi 2?
I have no idea right now. I am assuming Laxman sir is writing about one-two scripts that I know of. But I don’t know anything beyond that. I truly love him, he is such a genuine person. He is a very pure-hearted, honest, passionate guy and… his life story is a film in itself. Luka Chuppi had a different flavour and Mimi had a different flavour. He doesn’t like to repeat himself and that’s another thing I like about him.

You must be very proud of Nupur Sanon…
Yes, of course. I went on Youtube recently to check on Param sundari’s status and was surprised to know her song Filhaal 2 was at the number one spot. It’s a great feeling. Everyone has a different journey. She has started her journey with these two songs which are films in themselves. And they are doing extremely well. And she got that chance and that too with none other than Akshay sir. She’s started well on her journey and I’m extremely happy for her.