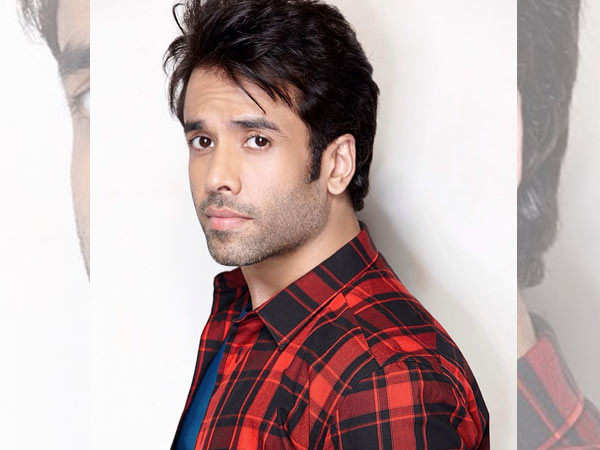 In 2001, a gawky, fresh-faced youngster played a boy next door in Mujhe Kucch Kehna Hai, which was a remake of the Telugu hit Tholi Prema (1998). Much has changed since Tusshar Kapoor played that boy perpetually smitten by Kareena Kapoor. Tusshar evolved from playing nice-guy roles to complex characters in films like Khakee (2004) and Shootout At Lokhandwala (2007) to being part of Rohit Shetty’s Golmaal franchise. Today, he has created a niche for himself as a comic hero. He became the first single male celeb from the industry to become a parent through surrogacy. While there’s no Mrs Kapoor, Tusshar loves being both father and mother to his doting son Laksshya, born in 2016. Last year, he turned producer as well with Laxmii. While the film received brickbats from the critics, it was later touted as one of the most-watched films on the OTT. Excerpts from a free-flowing interview with the star whose mantra is to keep moving forward in life.

How does it feel to have completed two decades in the industry?
Two decades is not a small amount of time. I’ve pretty much had one release a year so I’ve never really taken a break since I started twenty years ago. There have been a lot of ups and downs. It’s a part of every actor’s life. I cherish both sides of that coin. The successes came after a lot of mistakes were made. I learnt from them and then just like the movies, got a happy ending. It’s been a fulfilling journey. I would want to relive it as long as films are still being made.

What’s been the biggest lesson and biggest regret in your career?
No regrets really. Of course, in the initial stages there’s always a learning curve that we all have to go through. You have to fall, make wrong choices and then collect your thoughts and experiences and learn from them. I learnt that it’s okay to say no sometimes, to speak up for yourself and sometimes even do things which make you unhappy initially. That’s the best way to get your finest work out. That’s why I turned my career around with Khakee and it’s been pretty steady ever since.

What was your first day on the sets like?
My first day of shooting was at the Mehboob Studios. I remember I went to Siddhivinayak temple with my father that day and he then dropped me to the sets. I recall being very nervous though I wasn’t showing it. It was a sequence where I had to walk with a stick because I had an accident. I then had to head to Kareena Kapoor’s house to propose to her and she rejects me. Then my character wakes up and it was all a dream. So my character decides not to take that plunge. It was a dream sequence that was eventually edited out because of the length of the film. And that was a good thing as I was still learning the ropes and that was like a warm-up day for me. It was only after a couple of days that I realised that acting is something that I can get a hang of, something that I was beginning to enjoy. The first schedule was like your first day at school. But the first day was quite a bad dream.

What did it feel like when you won the Best Debut Award at Filmfare?
I still remember that day. I was so nervous because I didn’t know if I would win. I took a chance and went to the ceremony and got it. I was so excited. I remember thanking my co-stars, Kareena and Rinke Khanna. Kareena even said on stage that she’s never seen a hero thanking a heroine when he wins an award. We had a party at my house. My parents had invited some friends over by chance and we joined in and celebrated the award also. Those were such innocent days, quite stressful too. We valued awards a lot. It was such a big deal then. Even after winning, we’d have a hangover of the anxiety of being at an event like that. Multi-tasking was not such a simple thing those days.I have bittersweet memories of that time.

How did you cope with a setback or failure initially in your career?
I was so young when I started out. At that age every actor gets funked out when a film isn’t well received in the first few years. That’s what happened to me. It was tough and I didn’t know how to deal with it. Gradually I realised it was inevitable and you have to keep working and making better choices. I had no idea how to cope with setbacks or failure. We didn’t speak of these emotions back then. We had to struggle and fight our own battles. I would just get up the next morning and go back to the sets. Today we have so many devices and people to talk about stress. Back then you had your parents, who’d tell you it’s going to be fine. That’s all. You had to wake up and just bear with it. There was no one else to help you through failure or depression.

Your first film as a producer, Laxmii had an OTT release due to the pandemic. Were you disappointed that it did not get a theatrical release?
I was a little disappointed initially that we had no choice but to take the OTT route. But I’m glad that happened because otherwise we would have been waiting for its release even today. We did the right thing. The film was ready so why keep it with yourself? I kept myself positive and went ahead with what everyone said was the right thing to do. When it released online, it got mixed reviews but then gradually we found out through the number of views and ratings that it did well on OTT. Then, when it came out on satellite, the record was set straight with TRPs that are synonymous with a hit Akshay Kumar film. Of course, there would have been a week or two of euphoria had we released it in the theatres. We pretty much got the validation otherwise.

What made you pick Laxmii as your first production?
My co-producer Shabinaa asked me to watch Kanchana and the day I saw it, I knew I wanted to remake it. Either I wanted to act in it or produce it. I just had to be a part of it. It was a long process after that with lots of ups and downs. But it’s all worth it because I like this genre and once you set your heart on something, you shouldn’t give it up. That’s become my motto in life now. You have to fall, get up and move on.

How do you envision OTT and theatres co-existing in the future?
I think theatre, OTT and television will all co-exist. OTT has become a great alternative. I started watching shows online only after the lockdown. Now it’s become a great alternative and I haven’t really missed cinemas. But we all know, when theatres reopen, we will all go back to them. That culture is in our blood. While we have a way out for our daily entertainment with OTT, the truth remains that when theatres reopen, people will flock to the cinemas and the box-office will be broken. It’ll be a storm.

What has family life been like for you in the lockdown?
I’ve been doing online schooling with my son Laksshya for over a year and a half now. I’ve been sitting in on his classes and that makes up for half of my day. After that I go to the gym and that is followed by meetings. In the evening, I’m back with my son, we have dinner and then I’m back to reading scripts, checking mails and working on errands I couldn’t do in the day. So it’s a non-stop day and I don’t find time to get bored. I’ve picked up a new habit of watching something before bed so I never get bored.

What’s your biggest takeaway from fatherhood?
I can write a book on my journey as a father. Very briefly, the time that you spend with your child is the biggest gift you can give him/her. More than the money or gifts, it’s time that’s more valued. That’s what has brought me closer to him and we do so many things together now. He’s a balanced child because I’ve been with him through this journey and I balance out my work to spend enough time with him.

What are you working on next?
My next film is as a producer and actor, both. It’s called Mareech. It’s a thriller and dark, very different from what I’ve done before. It’s most likely to release on OTT but I haven’t worked out the details of that yet. As the title suggests, it’s spooky, mysterious and it’s the first of its kind for me.

If you get a chance to give some advice to your 20-years-younger self, what would it be?
I wouldn’t change anything personally about myself because I was raw but it worked for me. I would just tell myself that you shouldn’t worry and God is always by your side if you’re willing to take on the challenges that come in your way. Don’t worry about what’s not in your control. Even if you do screw up at times, don’t worry if there’s nothing you can do about it. You’ll meet all kinds of people, some who are nice to you and some who aren’t. Take everything with a pinch of salt. Focus on life and work and watch everything fall into place.