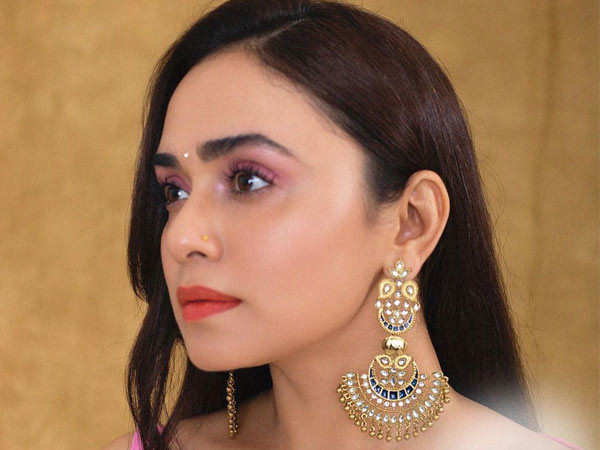 You didn’t have work for two years. An actor’s life is filled with ups and downs and a lot of uncertainty. How do you heal?
I was a very stubborn child. I believe that if I hadn’t been in this industry, I wouldn’t have known terms like humility, gratitude and patience. I feel that God has literally pushed me into this industry so that I realise the meaning of all these terms. Gratitude, humility, patience and consistency are so important in your life. Somehow, the actor that I’ve become has shaped me as a human being. And the person that I’ve become has also shaped me as an actor. If you get a cough and a cold, the doctor gives you a course of five days and your body heals. But what about the mind? My parents were so busy making a living for me and my sister that they did not have time to sit and tell us how to live life. They showed us through their examples whatever they could – they tried their best. But for every next generation it is important to know that when you put your mind in stress it is also necessary to heal it. I’ve always listened to my doctors. Nowadays, I seek the advice of an Ayurvedic doctor. I stopped allopathy right after Nach Baliye. I changed my lifestyle, I started reading more, and listening and watching the good stuff. Positive thinking is not something that you wake up to one day and think, today I’m positive. No. It is food for your mind. You have to keep feeding it and that is how you get your energies cleared and that is how you rise in your vibrations.

Tell us about your first Filmfare Awards memory.
My God there are so many. Watching Filmfare, right from childhood, was like a big event at home. When Filmfare came on TV, I used to snatch the remote and keep it with me till the end credits rolled. I used to watch these huge stars coming in and performing and taking home the awards and longed to experience it all myself one day. Madhuri Dixit performing Dola re dola… Aishwarya Rai performing Silsila ye chahat ka… Shah Rukh getting the Black Ladies left, right and centre… all these memories are something that have actually shaped my childhood. When Filmfare started an awards ceremony just for Marathi cinema that was like a dream come true not just for me but for the entire Marathi industry. Marathi cinema has been experiencing a good run recently and I’m glad to be a part of these golden years. And Filmfare coming to Marathi is a big deal. My favourite personal memory is the first Marathi Filmfare Awards where I performed on stage. To see the photos from my dance performance splashed in the Filmfare magazine was exhilarating. I remember keeping the magazine in the mandir. Then, my second memory was getting nominated as Best Supporting Actor and our darling Neena Kulkarni winning that award. And I couldn’t be happier. Then, the third one was performing mujra on stage to all Rekha ji songs. I remember watching her in her die-for Kanchivaram sarees at various Filmfare functions. Recreating her songs on stage was a huge honour.

How did it feel when you were walking on the Filmfare red carpet for the first time?
I was grinning from ear-to-ear. I think I finally understood what that phrase meant. (Laughs). I think every actor glows on the stage of Filmfare.

Take us through some of your performances or rehearsals, something that stayed with you?
The mujra performance really stayed with me. Because, firstly, it was so beautifully choreographed by Subhash Nakashe and there were these props which looked like they were part of an old set. They helped me to get into the mood of mujra. There is always a shayari that it starts with. I had always seen Madhuri Dixit do that on the stage of Filmfare. So, the whole poetry bit and coming down from the prop and performing to Rekha ji’s songs… that is something I will never forget. Subhash Sir always encouraged me saying it’s a privilege to perform on the Filmfare Stage. And I should count my blessings that I’m getting to perform on Rekha ji’s and Madhuri Dixit’s songs.

Tell us about the Katyar Kaljat Ghusali moment when your film won so many awards.
While filming Katyar, the kind of vibe and energy that Subodh Bhave generated was infectious. Every film is a team effort. And even after five years of that film, we’re still part of its WhatsApp group. We still send funny messages and Gudi Padwa, Diwali and New Year wishes to one another in the group. I think that film was bigger than all of us. For every award, we were kind of taking the entire team onstage. And when it got the Best Film Award, we literally called up everyone who was associated with it on stage. It was a unique experience.

Your dance performances have a certain seamlessness. Did it intimidate you knowing that you’d be doing a Sandhya number in Ani… Dr. Kashinath Ghanekar.
When you’re a rookie, you make do with what you get. For many years I only performed Wajle ki baara (Natarang, 2010), which thankfully had become a huge hit, in my shows. I wanted to do something different and always longed to recreate an iconic song from the past. So to perform a legendary number like Tumhavar keli mi marji bahaal from Pinjara (1972), which was immortalised by Sandhyaji, was a once- in-a -lifetime opportunity. Nothing from the original song got changed in Ani… Dr. Kashinath Ghanekar (2018). The costumes, the props, the lighting, camerawork, everything was the same. Sumeet Raghavan played Dr Shriram Lagoo and I was playing Sandhyaji. We were asked to mimic their expressions. And I think we both managed it well. Those who had seen the original appreciated it, as did the new generation. It acted as a doorway to the past for them.

You’ve done OTT, Hindi films, so many serials and also a reality show – how do you process all this?
Frankly, I think as an actor, your only aim should be to just do your job. And I’m not just saying it for the heck of it. I adhere to it from the bottom of my heart. I’m not somebody who has limited my options. Like if I had limited my options, I would have never done a Katyar or a Raazi. I give my best to whatever opportunities I get. Wajle ki baara was just one lavani number in Natarang. Sonalee Kulkarni was the heroine, who got another fabulous number, Apsara aali in the film. So there’s nothing to process as such. Just keep giving your 100 per cent to whatever comes your way and you’re sorted.