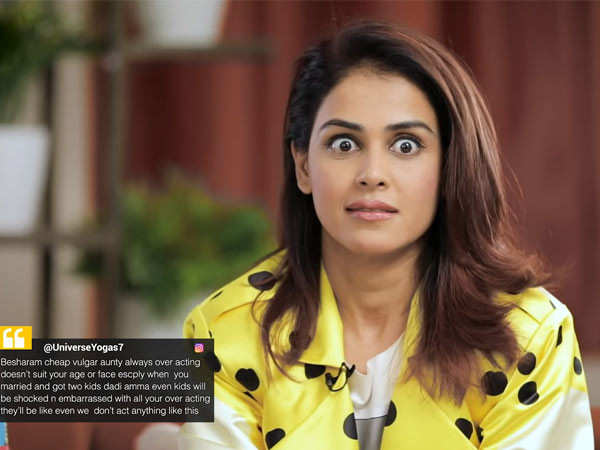 Bollywood celebrities are used to getting trolled and being called horrible names on social media – maybe it’s part of the job. However, some trolls take it too far. Recently, Genelia Deshmukh was on Arbaaz Khan’s talk show, Pinch where the host read out some mean comments against Genelia. The comments were startling in the sense that they were reeking of acute vehemence and dislike and shocked even Genelia.

“Besharam, cheap, vulgar aunty always overacting. Doesn’t suit your age and face especially when you’re married and got two kids dadi amma. Even kids will be shocked and embarrassed with all your overacting. They’ll be like, ‘Even we don’t act anything like this’,” a troll had commented on Genelia.

“I don’t think he’s having a good day at home. I hope you’re well, bhaisaab. I hope you’re really okay at home,” Genelia said, shocked at the anger in the comments. Genelia’s husband, actor Riteish Deshmukh said that celebrities have to develop a thick skin after making the decision to become public figures. “It’s okay for people to come, because you’re putting yourself out there. I don’t think one should take offence. I always write, ‘Love you too, my friend’,” he said.