Gangubai Kathiawadi, RRR and Attack to release in cinemas; clarifies the makers 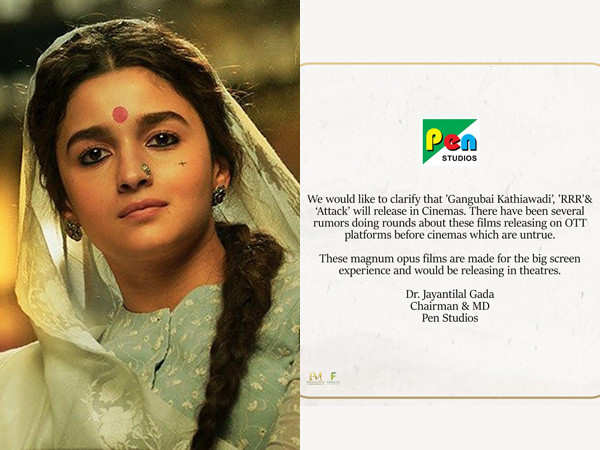 Some of the biggest films like Sanjay Leela Bhansali’s Gangubai Kathiawadi and SS Rajamouli’s RRR are stuck in the pipeline due to the pandemic. These two films along with John Abraham starrer Attack have been backed by Pen Films and there were rumours recently about these films going directly on OTT. However today the banner’s official Twitter account rubbished these rumours.

Due to the pandemic some of the biggest films are planning to go to OTT but Pen Films’ social media account reveals that the films will only be released in cinemas. The tweet with the statement read, ‘We would like to clarify that Gangubai Kathiawadi, RRR and Attack will be released in Cinemas. There have been several rumours doing rounds about these films releasing on OTT platforms before cinemas which are untrue.’

The statement further added, ‘These magnum opus films are made for the big screen experience and would be released in theatres – Dr Jayantilal Gada (Chairman & MD – Pen Studios).’

That’s some good news. Many filmmakers are taking on the challenge to release their films in theatres. Films like Akshay Kumar’s Bell Bottom and Kangana Ranaut starrer Thalaivii release in theatres and that is giving encouragement to bring normalcy back in theatres and multiplexes. While Gangubai Kathiawadi is already complete, RRR has certain portions to be shot and huge work on VFX. The John Abraham and Jacqueline Fernandez starrer Attack is in the pipeline awaiting its release.