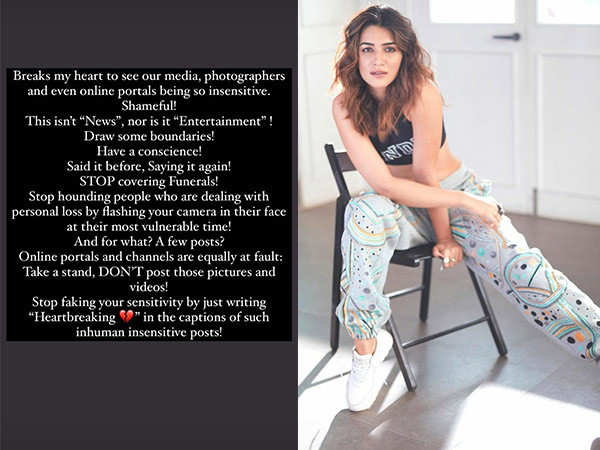 Last week on September 2, the untimely death of Sidharth Shukla came as a shocker for everyone. The actor’s fans and his several friends are still in complete shock and the actor’s funeral that took place on September 3 was widely covered by the media. The media’s insensitive coverage of the funeral and even capturing his dear ones’ grief on camera surely didn’t go down well with Kriti Sanon.

Kriti Sanon took to her social media last night and shared her thoughts on the same. The actress lashed out the insensitive media coverage of the funeral. “Breaks my heart to see our media, photographers and even online portals being so insensitive. Shameful! This isn’t “News”, nor is it “Entertainment”! Draw some boundaries! Have a conscience! Said it before, Saying it again! STOP covering funerals!”

She further points out about cameras covering the moment where the deceased’s near ones are in grief and not given privacy at their most vulnerable moment. She said, “Stop hounding people who are dealing with personal loss by flashing your camera in their face at their most vulnerable time ! And for what? A few posts? Online portals and channels are equally at fault” Take a stand, DON’T post those pictures and videos ! Stop faking sensitivity by just writing “Heartbreaking” in the captions of such inhuman insensitive posts.”

Kriti Sanon has always spoken her mind and made sure she points out this insensitive coverage. Recently Anushka Sharma too shared a post by a comedian Zakir Khan who penned down a post of how celebrity deaths are turned into a tamasha for the media. Looks like our celebrities surely have something important to say.