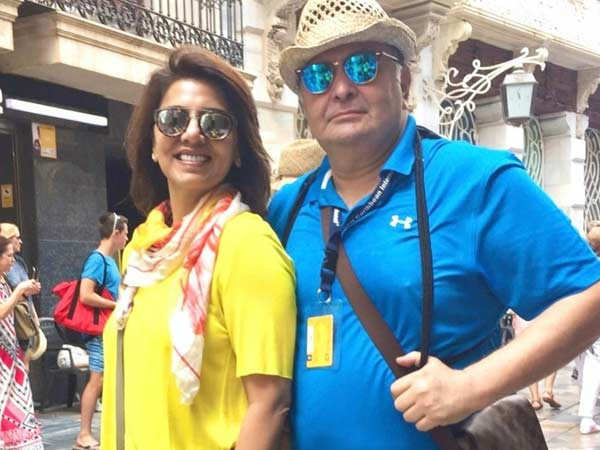 Today Rishi Kapoor marks his 69th birth anniversary. The actor was known for living a happy life surrounded by good food and his family and a lot of laughter. Neetu Kapoor who stood by him through his highs-and-lows misses him immensely today and pens down a sweet note.

Neetu Kapoor took to her Instagram and shared a post where we see her posing with Rishi Kapoor from one of their vacations. In the note she cherishes the last few years she spent with him. She notes down how they would celebrate if his reports were good, and how even if unfortunately his reports were bad the couple would make sure to cherish the moment together. In the post she even lovingly calls him – Kapoor Saab and happily concludes that he would be celebrating his birthday up above with his loved ones.

Here’s what her caption reads: ‘I learnt a lot from Rishi Ji during our last few traumatic years in NYC .. how we celebrated when his blood counts were high .. we dined shopped laughed .. in his lows we just stayed home watched tv ordered in amazing food n still had some wonderful moments in hope that the next round of chemotherapy he would be better .. hope n being strong is what he taught me .. value each day .. we all miss him today !!! I can picture him how excited he would have been for his 69th birthday !! I’m sure he is celebrating with his family up there… Happy birthday Kapoor Saab.’

Her posts saw many comments from her friends and family. Ekta Kapoor, Manish Malhotra and many others commented with red-heart-emoticons and sent out their love for the actress.

Riddhima Kapoor Sahni too shared a lovely post in remembrance of her father. She shared a childhood picture with Rishi Kapoor and said that she celebrates him everyday.

Riddhima Kapoor Sahni and Neetu Kapoor are going to make an appearance on a chat show this weekend hosted by Kapil Sharma and the gorgeous mother-daughter duo talk about their family in all fun and humour.