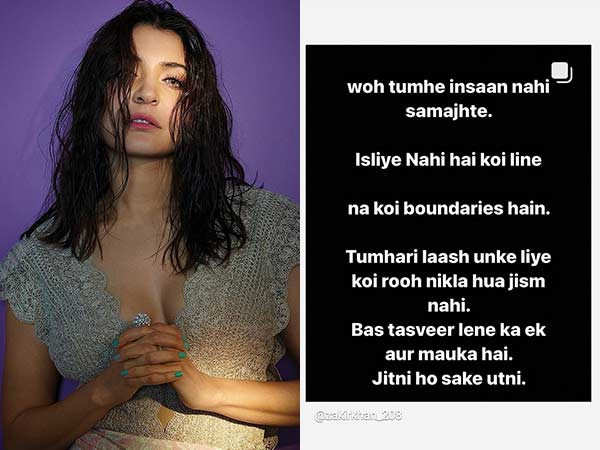 Anushka Sharma is active on social media and she only shares stuff that are on-point and something about to alert the citizens. A few days back she shared a post as a special plea to Mumbaikars – to keep wearing your mask and help to fight the pandemic. Today she shares a story posted by a stand-up comedian Zakir Khan.

Stand-up comedian Zakir Khan has summed up the whole scenario of how a celebrity death is turned into a tamasha. He has beautifully penned down lines which says things like how the mortal remains of the celebrity is seen as a deceased body who has left its soul… but rather its seen as an opportunity to click pictures… and as many pictures they can click.

Sharing such powerful lines, Zakir’s poem is in context to the recent death of TV and film actor Sidharth Shukla. Netizens were surely moved by Zakir’s story and many agreed with him too. Anushka Sharma who got her hands on the post made sure she shared it on her Instagram story. The actress didn’t caption it anything, but her sharing the post was indicative enough that the talented beauty shares the same thoughts and wants us to read it too.

Here’s a short excerpt from the post in English, “That’s why your death will only be show for them. Your crying mother is a show, your father, broken by the pain, is a show, your depressed sister, your brother who has lost all hope, anyone who loves you, is a show. It would have been another thing had you been alive. After you, your crying loved ones will only quench their thirst. I’m just saying that this is the life you and I have chosen. Maybe you will regret it a little less if you knew this while you were alive. That’s why you should stay happy with your friends, love your people. Learn new things, make new relationships. Just don’t live for them. Whatever time you have left, live for yourself. Because for them, you aren’t even human.”

Anushka Sharma is currently with her husband, Virat Kohli, accompanying him for a cricket series. Both Anushka and Virat are also having much more time to spend with their daughter Vamika who has joined them in this tour.