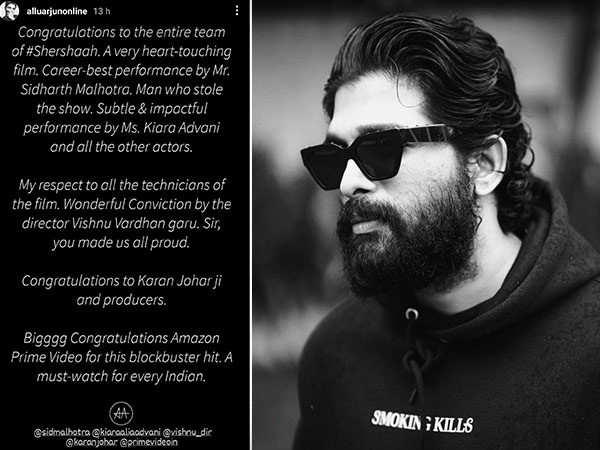 Sidharth Malhotra starrer Shershaah has been loved by all. It has received praise not only from the Mumbai film industry but the South industry as well. Kamal Haasan was all praise for the patriotic film last week and now another South superstar, Allu Arjun, is all praise for it.

Allu Arjun took to his Instagram story and sang praises for the film, complimented Sidharth Malhotra for his correct portrayal of Captain Vikram Batra, and even termed it as career’s best performance. He was equally bowled over by Kiara Advani and a special mention to all the technicians. An excerpt from his story says, “Congratulations to the entire team of #Shershaah. A very heart-touching film. Career-best performance by Mr Sidharth Malhotra. Man who stole the show. Subtle & impactful performance by Ms. Kiara Advani and all the other actors.”

He further adds, “My respect to all the technicians of the film. Wonderful Conviction by the director Vishnu Vardhan garu. Sirf, you made us all proud. Congratulations to Karan Johar ji and producers.”

Now that’s really cool for the superstar from down South to praise the film so lavishly. Both Sidharth and Kiara reposted the story on their social media and thanked the superstar. While Sidharth added a smiley-emoji, Kiara added a hands-joining gratitude emoticon in her post.