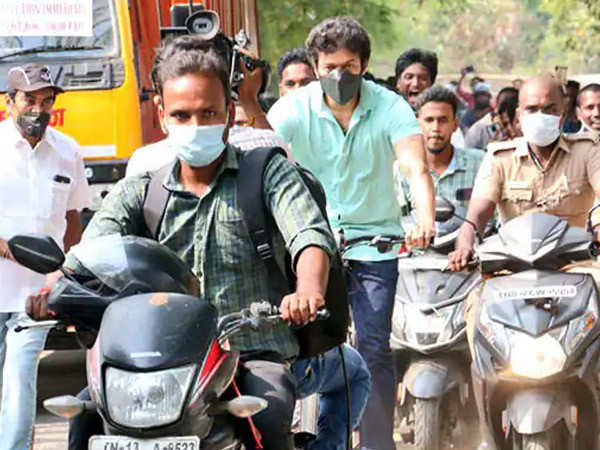 When actor Vijay rode a cycle to cast his vote in the Tamil Nadu elections, it caused quite a furore and an ensuing traffic jam as his fans began following him. Videos have gone viral since yesterday where the actor can be seen peddling fast and is surrounded by fans trying to take pictures of him. At the polling booth, the crown went wild on seeing the actor, causing the police to resort to mild lathi charge. There was also speculation whether Vijay was sending a message about the rising fuel prices and hence he had chosen to ride a bicycle.

However, his publicist has confirmed that there was no ulterior motive to Vijay’s bike ride. “Thalapathy Vijay decided to go by cycle instead of using the car because the poll booth was right next to his residence and taking the car might have congested the road even more. There was no other intention behind it!” – tweeted Riaz K Ahmed. The clarification comes on the wake of speculation amongst Tamil Nadu’s DMK leaders that Vijay was sending a message to the ruling AIADMK which has a tie up with the BJP.